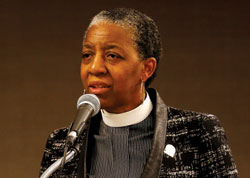 Students of color, particularly boys, are suspended and expelled at alarming rates and zero-tolerance school discipline policies fail the communities they serve, said several speakers on a panel at this year’s ABA Midyear Meeting.

Black students are 3.5 times more likely to be expelled than white students, said Nancy Heitzeg, a sociology professor at St. Catherine University in St. Paul, Minn. She noted that more than 70 percent of students involved in school-related arrests or referred to law enforcement are black or Latino. Many of them, she added, have special needs addressed through individualized education plans.

High-stakes testing also complicates the issue, Heitzeg said, and schools are using suspensions and expulsions to push out underperformers. She noted the statistics at a town hall forum, “The School-to-Prison Pipeline: What Are the Problems? What Are the Solutions?” The event was jointly sponsored by the ABA Coalition on Racial and Ethnic Justice, the Criminal Justice Section and the Council for Racial and Ethnic Diversity in the Educational Pipeline. “They say we should ‘leave no child behind.’ The fact is we are leaving the majority of the nation’s future behind,” said panelist Janette C. Wilson. A lawyer, pastor and former teacher, Wilson spoke of a “Gestapo-type environment” at schools.

“Once you’re in the building, the search-and-seizure procedure … greets you at the front door,” Wilson said, referring to police stationed in public high schools.

‘SEEMS TO BE A DISCONNECT’

Another concern was raised by Robert Saunooke, a Miramar, Fla., lawyer who chairs the ABA Tribal Courts Council. He noted that teachers and school leadership often do not take the time to understand students as individuals.

Kaba, founding director of Project Nia in Chicago, a grassroots group with a long-term goal of ending Illinois youth incarceration, described “an actual anti-blackness” mindset that had taken root in many school systems.

“If we can’t name it, we can’t solve it,” Kaba said. “People are scared to death of black kids, including black people. Young people sense that fear and loathing of them, and they act accordingly.”

This article originally appeared in the April 2014 issue of the ABA Journal with this headline: “Racial Imbalance Feeds School-to-Prison Pipeline.”