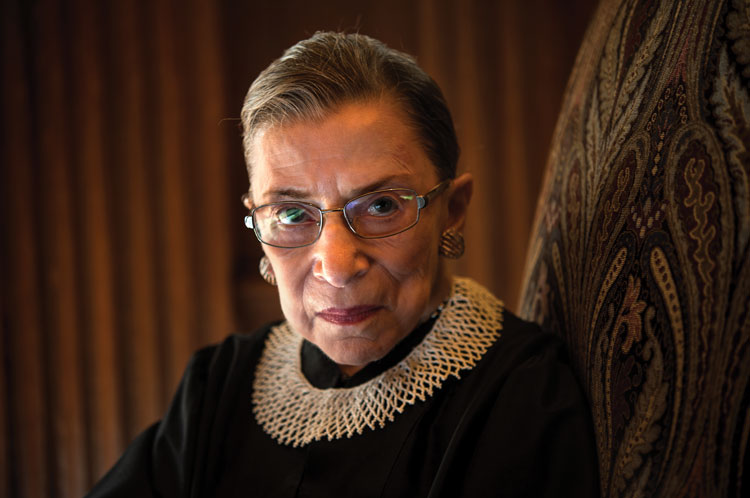 In 1978, Ruth Bader Ginsburg was part of a 12-member American Bar Association delegation that visited China. The country was starting to emerge from the Cultural Revolution and was in the process of implementing vast economic reforms, including opening up to foreign businesses.

Other delegation members included William B. Spann Jr., a big-firm Atlanta lawyer who was president of the ABA; and Chesterfield H. Smith, a former ABA president who on behalf of the organization called out President Richard M. Nixon during the Watergate scandal for firing special prosecutor Archibald Cox. The delegation received briefings from members of Peking University’s law department and the vice president of the Supreme People’s Court, the country’s court of last resort, and also observed a criminal trial.

Then a professor at Columbia Law School and an active member of various ABA entities, Ginsburg was her “customary decorous self” on the trip, Stanley Lubman, the delegation’s secretary general, told the ABA Journal. “She allowed some of those who were self-important to express themselves where she observed,” Lubman wrote in an email. A professor who has taught Chinese law at various Ivy League universities, he also recalled the group going to a rural village where a local official explained that the country’s one-child policy was implemented by monitoring and posting women’s menstrual cycles.

“I was struck by the expression of shock and disgust on her face and have never forgotten it. She was incredulous that the women’s privacy was so invaded. She said nothing to the Chinese, as she was well aware that we were there to observe the Chinese version of their facts,” he wrote.

Ginsburg, the second woman confirmed to the U.S. Supreme Court, died in September from complications related to metastatic pancreatic cancer. As a pioneering litigator, she argued—and won—several landmark gender discrimination cases before the Supreme Court.

Her ABA work included serving as a council member of the Section of Individual Rights and Responsibilities (now known as the Section of Civil Rights and Social Justice) in the 1970s, and she was on the Standing Committee on Amicus Curiae BriefsIn the 1980s, she was on the American Bar Foundation’s board of directors and served on the council of the American Law Institute, which had co-sponsored nationwide CLE programs with the ABA until 2012. Additionally, she was a member of the ABA Journal’s board of editors from 1972 to 1978 and even wrote an account of the China trip for the magazine.

‘She enlightened his mind’

Just prior to her death, Ginsburg, 87, had been a 2019-20 special adviser to the ABA’s Rule of Law Initiative board. And when she won the Berggruen Prize for Philosophy & Culture in October 2019, she donated all of her $1 million award to various groups, including the American Bar Foundation.

“She never forgot where she began,” says Llewelyn Pritchard, a current ROLI board member and previous chair of both the ABA Board of Governors and the IRR.

Ginsburg and Spann, who died in 1981, became friends through the IRR, says Thomas Fitzpatrick, who worked as Spann’s ABA special assistant. Spann was receptive to women’s rights when he met Ginsburg, but she got him to see that laws thought to protect women actually limited their options.

“I wouldn’t say she changed his mind, I would say she enlightened his mind. That’s the same role she played in public life and on the court,” adds Fitzpatrick, a Seattle lawyer who served on the board of the ABA’s Center for Professional Responsibility.

Marna Tucker, a domestic relations attorney who chaired the ABA’s Standing Committee on the Federal Judiciary and was the first woman to serve as president of the District of Columbia Bar, posits that Ginsburg probably joined the ABA to help educate members about equal justice issues.

The two met through the IRR in the early 1970s when Tucker worked as a consultant for a project that encouraged pro bono work at private law firms.

“People knew it was an important pathway. And for those of us who were active early on, it was tremendously important. When there were fewer of us, we stood out. Although we may have taken a lot of slings and arrows, we were also remembered, and good things happened to us,” she adds.

“I remember when Ruth’s name came up and someone said, ‘She’s in New York; she should be on the 2nd Circuit,’” Tucker says.

The 2nd Circuit panel of the U.S. Circuit Judge Nominating Commission took a pass, Tucker adds. So the D.C. commission recommended Ginsburg for the U.S. Court of Appeals for the District of Columbia Circuit, and she was appointed to that court in 1980. 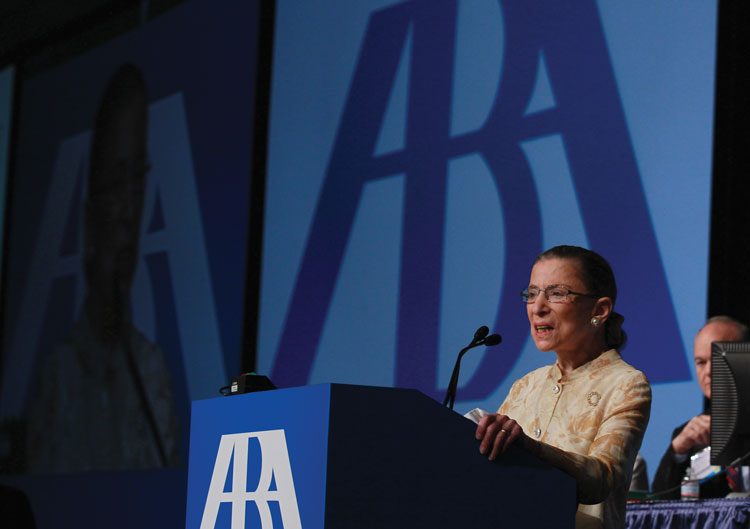 Justice Ruth Bader Ginsburg speaks to the ABA House of Delegates at the 2010 annual meeting. Photo by Justin Sullivan/Getty Images

“She never let the hoopla get in the way of her commitment to accept the award. One of the themes that keeps recurring is how much you could always count on her. Particularly if it had to do with women, women’s organizations or being a mentor, she would help in any way she could,” says Cory Amron, a retired D.C. lawyer who chaired the ABA’s Commission on Women in the Profession in 1993.

Ginsburg also received the Fellows of the ABF’s Outstanding Scholar Award in 1995; the Thurgood Marshall Award, which comes from the Section of Civil Rights and Social Justice, in 1999; and the ABA Medal, the organization’s highest honor, which recognizes contributions to the law and the profession, in 2010.

“She was always supportive of the ABA. Even as a justice, she was always open to casual visits at the Supreme Court. That kind of openness was part of the ambiance she created around herself,” says Martha Barnett, a Florida lawyer who served as ABA president in 2000-01.

That was important, says Roberta Cooper Ramo, a New Mexico lawyer who in 1995-96 was the first woman to serve as president of the ABA.

“It’s not only helpful for our members, but it offers a great opportunity for those on the court that wanted this experience to talk to regular American lawyers and judges and see what life was like,” she says.

ABA President Patricia Lee Refo in a statement described Ginsburg as “a groundbreaking jurist” and “a special friend of the ABA.”

In February, Ginsburg was part of a public conversation centered on the 19th Amendment that was co-sponsored by the ABA and Georgetown Law. Judge M. Margaret McKeown, who sits on the San Francisco-based 9th U.S. Circuit Court of Appeals and chairs the ABA’s Commission on the 19th Amendment, interviewed Ginsburg.

Ginsburg’s late husband, Martin Ginsburg, was a noted tax lawyer, cook and great supporter of his wife who often accompanied her to ABA events. Ginsburg submitted two of his recipes—for ratatouille and a veal dish known as vitello tonnato—for a recently published digital cookbook by the commission titled The Nineteenth Amendment Centennial Cookbook: 100 Recipes for 100 Years.

“When Ruth came on, she attended all our meetings; sometimes Marty would come with her. They participated in everything that went on and some of the social events,” says Pritchard, who remembered going to Walt Disney World in the 1970s with one of his daughters and the Ginsburgs and their son, James, during an ABA meeting in Florida.

“We had a wonderful time. She was a warm and wonderful person,” Pritchard says.

This story was originally published in the Dec/Jan 2020-2021 issue of the ABA Journal under the headline: “Supreme Friend: Remembering Justice Ruth Bader Ginsburg and her longtime association with the ABA.”

Print and initial online versions of "Supreme Friend," December-January, should have stated that the American Law Institute partnered with the ABA to provide national educational programs from 1947 to 2012.