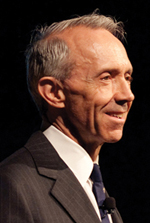 Like the manner of the man who delivered it, the message was simple, direct and steeped in the heritage of traditional New England democracy: “We have to do something to improve civic education in the United States,” said re­tired U.S. Supreme Court Justice David H. Souter.

Speaking at the 2009 ABA Annual Meeting, Souter warned that specific problems facing the nation’s courts —such as funding shortages or interference from the other branches—are not the real threat to judicial independence. Rather, he said, “the root problem is a public majority unaware of the basic shape of government.”

In making his case, Souter invoked his recollections of the annual town meetings that were held each March in Weare, N.H. Attending those meet­ings as a young boy, he said, established an early understanding of the separation of powers among the government branches and the limits on those powers. For him and other children of the town, those lessons were locked in by the time they took civics classes in high school, he said.

But a survey by the Annenberg Public Policy Center showed that two-thirds of U.S. citizens cannot name all three branches of government, Souter said.

“This is something to worry about,” he said. “The idea of judicial independence must be practically meaningless” for someone with that lack of knowledge about basic government structures.

“We have to take on the job of making American civics education real again,” said Souter, who called on the ABA to play a leading role in that effort. “What more important work can you do?” he asked.

The association already is on task. ABA President Carolyn B. Lamm of Washington, D.C., has requested funding to support initial efforts to look into the need for better civics education, and President-elect Stephen N. Zack of Miami has indicated he will make civics one of his priorities.