Standing Up to the ‘Artful Dodger’ 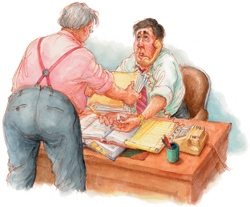 About six months ago, Max Gaines and Billy Strickland left the town’s biggest firm after they had a fight with the managing partner. A week later, they started their own shop. Gaines was supposed to be the rainmaker, while “Tricky” Strickland was considered the litigation strategist.

I was surprised that Sandy Kilgore decided to join them, but not that she looked troubled as she walked into the Brief Bag yesterday.

“They’re telling me to do some things that could get us all into serious trouble,” said Sandy.

“What kinds of things?” said Angus. “Playing too close to the line with discovery?”

“Wrong side of the line,” said Sandy. “They’re asking me to stonewall on providing some documents. The problem is, what do I do about it? What do I do about an ethics problem that’s from inside the firm?”

“You’ve got to do something,” said Angus. “And how you do it is just as important as what you do.

“Let me tell you about something that happened to me,” he said. “I started out with a small firm when I got out of law school. Randall, Martin and Dodge. Interest­ing place. C.W. Randall was the head of the firm, and one of the most respected lawyers in the state. I hardly ever saw Charlie Martin, who spent most of his time doing wills and trusts. But Arthur Kimball Dodge was the scourge of the associates. We called him the ‘Artful Dodger,’ a name he got from something he had done to one of the associates.

“The Dodger walked into Mike Farragut’s office when Mike had been with the firm for less than a month. He had a big file under his arm and asked if he could use Mike’s phone.

“ ‘Sure, Mr. Dodge,’ said Mike, never wondering why a name partner needed to use an associate’s telephone.

“With the file tucked under his arm, Dodge picked up the phone and dialed. ‘Hello, Judge Mudrock?’ he said. ‘This is Arthur Dodge over at Randall Martin. Judge, I’m with one of our new associates who’s got a file on his desk’—and at this point Dodge took the file and dropped it in front of Farragut—‘in which a default judgment has just been entered. Yes, judge, exactly. Oh, you’re right. He’s a very red-faced young lawyer’—which by this time was true.

“Dodge continued: ‘Judge, he’ll be in your chambers this afternoon with a motion to reopen the default. And he promises it will never happen again.’

“Then the Dodger hung up the phone and said to Farragut, ‘Mike, you take it from here.’

“I had a strategy all set if the Dodger ever tried to pull that stunt on me. And about a month later, he walked into my office with a file under his arm.

“As soon as he came in the door, I said, ‘Good morning, Mr. Dodge. Say, I’ve been having some trouble with my phone. Who do I see about that?’

“ ‘Just tell the receptionist,’ said the Dodger, who was there with something other than his phone gambit in mind. ‘She’ll call the phone company. Anyway, I’ve got a case I want you to work on. It just came into the office this morning, and we got a big retainer.’ ”

CAUGHT IN THE DRAFT

“I was relieved—inappropriately, as it turned out. So I said, ‘Sure. What’s it about?’

“ ‘Biggest estate case the city has seen in years,’ he said. ‘This will show Charlie Martin that he’s not the only one in the firm who can attract this kind of work.’

“The Artful Dodger went on. ‘Thirty years ago, Amos Tyndall died, leaving a life estate in a $75 million trust to his grandson, who never touched the principal—he didn’t need to. Lived like a French duke off the income, and the trust is now worth almost $300 million, before taxes.

“ ‘But old man Tyndall wrote his own will. And he neglected to do anything with the trust after the death of the life tenant.’

“ ‘I want you to do a draft of the brief for me. And do a good job,’ said the Dodger. ‘Every important firm in town is in this case.’

“So I wrote a one-paragraph memo to Mr. Dodge, stating: ‘Under the statute, first cousins take to the exclusion of all subsequent classes. Since there is a living first cousin, there is no way we can get anything, no matter when the heirs of the testator are determined.’

“Half an hour after I gave my memo to his secretary, the Dodger was back in my office.

“ ‘I want you to continue this project,’ he said.

“ ‘But we haven’t even deposited the retainer check,’ he said.

“ ‘You don’t understand,’ the Dodger said. ‘The list of firms that have entered appearances in this case is like a Who’s Who of the state bar. We’ve got to be in this case.’

“ ‘Even if we get laughed out of court?’ I said. ‘As long as we only have a second cousin, we lose.’

“ ‘Let me worry about that,’ said the Dodger. ‘Just write the brief on the question of when you determine the heirs of the testator.’

“So I got back to work, but that night I didn’t sleep very well. What kind of outfit was I working for? Didn’t they know they had an obligation to tell their client he had no case? Were they just going to spend his retainer on research and then back out? Even worse, would the Dodger stand up in probate court and make an argument for the second cousin without telling the judge there was an unambiguous rule that defeated his claim?

“If the Dodger didn’t tell the court about the statute of descent and distribution, did I have a duty to do so myself? How long would the firm give me to leave if I did that? But wasn’t getting fired better than losing my license to practice law?

“The following day, the Dodger came to my office. ‘Our worries are over,’ he said. ‘Our client is actually a first cousin.’

“ ‘Last night he told me his father was orphaned when he was a little boy, so he went to live with his aunt and uncle. They made him part of the family. Called him their son. To put it another way, they adopted him. So he’s actually a first cousin.’

“ ‘Was there any formal adoption?’ I asked.

“ ‘This was years ago,’ the Dodger said. ‘They didn’t do things that way then.’

“ ‘OK,’ I said, ‘I’ll get to work.’ But in less than an hour, I found that our courts had rejected the notion of a ‘common-law adoption,’ which at least took away our client’s temptation to perjure himself with his adoption story.

“But the Dodger was adamant. ‘You just write the brief,’ he said.

YOU CAN’T GIVE IN

“I decided to escalate things a little. When I finished the argument on when you determine the next of kin, I added a short ‘Part Two.’ The heading said, ‘Donald Williams Is Entitled to Share in the Estate Even Though He Is Only a Second Cousin.’

By this time, Sandy Kilgore was laughing. “That’s wonderful,” she said. “So tell me, what happened?”

“Oh,” said Angus, “the next day, the firm sent the retainer back to the second cousin.

“I learned something from all this,” said Angus. “The pressure is always there to cut corners—from your client, your firm, some senior partner or just your own pocketbook.

“If you’re a real lawyer, you can’t give in. You have to take a stand. But that doesn’t mean you have to act like a self-righteous twit in the process.”

McELHANEY AT HIS BEST
The ABA Journal is occasionally reprinting some of Jim McElhaney’s most popular columns from past years. This article originally appeared in the Journal’s August 1997 issue under the headline “Ducking the Artful Dodger.”