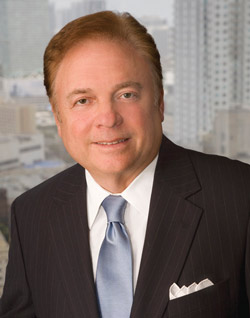 Also see: The Rise of the Latino Lawyer.

In 1972, Stephen N. Zack was a recently minted lawyer in court in Miami with a Cuban-American friend. The judge was miffed at his friend’s heavy Cuban accent, Zack says, and dismissed him from the courtroom.

“ ‘Get out of here until you can come back here and speak English,’ ” Zack recalls the judge saying. “Miami was still a pretty Southern town in those days,” says Zack. “Nobody would say that today.”

Last year Zack, whose mother is Cuban, became the ABA’s first president of Hispanic heritage. Even before that, he was one of the best-known Latino litigators in the country by virtue of having argued before the Florida Supreme Court on behalf of Democrats in the 2000 presidential ballot recount battle known as Bush v. Gore. Zack is administrative partner in the Miami office of Boies, Schiller & Flexner.

Zack credits much of his success to ABA mentors like the late Chesterfield Smith and the late Jerry Shestack—both former ABA presidents; but most often Zack cites his family’s experiences in Cuba as motivating both his decision to become a lawyer and his passion for the U.S. legal system. In 1961, his family was forced to leave the country and, like thousands of others fleeing post-revolutionary Cuba, they brought with them a bitter legal legacy.

“I had to leave the country. My family was detained by G2 [post-revolutionary Cuba’s intelligence service] and we lived under house arrest. We had no rights whatsoever,” Zack says.

“Cuba’s constitution was very much like that of the U.S. … But I learned that words are not enough to protect you. In my family’s case the loss of liberty was not just some theoretical exercise.”

Zack says his American education at a prominent school in Cuba helped his personal transition from immigrant to law student, but often there were subtle obstacles and prejudices he simply chose to ignore.

“Being a minority is being a minority. There was discrimination in Miami, even in the bar association. In fact, there was some prejudice even within the ABA. But I was never one to accept those obstacles,” Zack says. “I’m both Latino and Jewish, and perhaps it’s that combination that’s made me sensitive to any kind of discrimination.”

As immediate-past president of the ABA, Zack thinks fewer barriers to success now exist for Latinos and other minorities in the legal system. He says organizations like the ABA, the League of United Latin American Citizens, the Mexican-American Legal Defense and Educational Fund, and the Cuban American Bar Association have helped see to that.

But he says the legal profession still suffers a deficit of numbers: too few women and minorities in the upper reaches of law firms, and too few in the profession overall. “Latinos, for instance, represent 16 percent of the overall population, but only 4 percent of the lawyers,” Zack says. “Our profession has to mirror society or it loses credibility.”

While ABA president, Zack created the Commission on Hispanic Legal Rights & Responsibilities, a national commission designed to investigate the status of Latinos in U.S. society. He says the most striking problem is that of school dropouts, which is epidemic among Hispanics. “The future of Latino culture in this country is dependent on advancing education and being fully integrated into society.”

Still, he remains optimistic: “Whenever you’re breaking a barrier, it takes some time.”