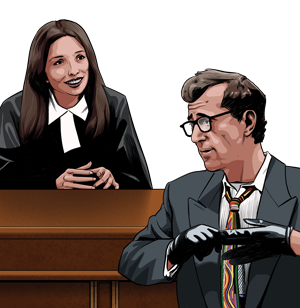 In just one of the great scenes in Woody Allen’s 1977 film Annie Hall, which won an Oscar for best picture, Alvy Singer (played by Allen) is alone with Annie Hall (Diane Keaton) for the first time. The scene unfolds like this:

(gestures toward photos on an apartment wall)

[A subtitle on the bottom of the screen reveals Alvy’s thoughts as he speaks: “You are a great-looking girl.”]

I would like to take a serious photography course soon.

Photography’s interesting, ‘cause, you know, it’s—it’s a new art form, and a, uh, a set of aesthetic criteria have not emerged yet.

[The next subtitle appears as Alvy speaks: “I wonder what she looks like naked.”]

Allen’s screenplay, co-written with Marshall Brickman, also won an Oscar, partly because of its clever and subtle use of subtext in several scenes. Many experts view legal trials as a courtroom corollary to the dramas that unfold in film and literature. And one of the devices that can be very effective in a courtroom trial, as in film and literature, is the use of subtext to go beyond evidence and testimony to show jurors and judges what the case is really about.

A cardinal rule in screenwriting is: “Never write a scene on the nose.” That is, a scene should never be about what the characters say it is about. In the movies, characters’ spoken words and their visual actions—or inaction—should direct the viewer toward a purposeful subtext: pointing toward what the scene is really about and suggesting how the scenes fit together to propel the plot forward. Screenwriting guru Syd Field, who died in 2013, put it simply: What is crucial occurs “below the surface of the scene ... what is unsaid rather than what is said.”

Allen playfully violates this cinematic conceit by making Alvy’s and Annie’s inner thoughts explicit through the subtitles displayed across the bottom of the screen. Of course, Allen also is making an insightful observation about interpersonal communications: The distance between our spoken words and our inner thoughts increases as the stakes are raised in dramatic situations. We become strategic thinkers who may seldom, if ever, reveal what we mean or express what we desire. Perhaps, at least in Allen’s neurotic world, we often aren’t even sure what we want or what we intend.

ON THE TRAIN TO SHADY HILL

The use of subtext often is even more complex in modernist literature. John Cheever was especially masterful at purposefully employing and exposing complex subtext within the tightly structured and highly compressed form of a short story. Cheever’s use of directed subtext is twofold: First, his dialogue, somewhat akin to Allen’s comedic literalism, reveals the inner lives of his characters. Second, Cheever simultaneously directs readers toward another intended subtext: Specifically, he masterfully exposes the shadowy and dark cultural landscape beneath the apparently benign surface of the comfortable upper-class, post-World War II social milieu that these characters typically inhabit.

In The Art of Subtext: Beyond Plot, Charles Baxter, who writes novels and short stories and teaches creative writing at the University of Minnesota, summarizes the plot of Cheever’s short story “The Five-Forty-Eight”: “The central character, a businessman named Blake, has had an affair with his secretary, the appropriately named Miss Dent. When the affair is over, he sees to it that Miss Dent is fired.” Baxter describes Blake as “a completely loathsome suburbanite who keeps up the appearance of gentility in business and at home, but whose inner life is hypocritical and self-deluded.” And Dent is “a lunatic of sorts, but in Cheever’s story she is a messenger of fate. ... She is the ax to open the frozen sea of Blake’s soul.” One evening after work, Dent pursues Blake to Grand Central Terminal in Manhattan, sitting next to him on the commuter train heading back to his home in suburban Shady Hill and announcing that she has a gun pointed at his belly. Dent, Baxter observes, is the “focusing agent” in the story and the train car becomes, in Cheever’s own words, a “dismal classroom.”

Cheever’s story exposes gender power imbalances, social cruelty and sexual abuse—a directed sociological or cultural subtext beneath the guise of suburban gentility as it excavates depths in the characters’ inner lives—what is beneath the surface of who we are and what we pretend to be.

The artful use of subtext is equally important in many litigation stories. I was reminded of this recently when I binge-watched two topically related television programs about O.J. Simpson: The first was Ezra Edelman’s ESPN documentary O.J.: Made in America, exploring Simpson’s story and trial as part of a larger cultural and historical tapestry. The second program was the Emmy Award-winning FX docudrama The People v. O.J. Simpson, focusing on the trial itself from the perspectives of the lawyers within it, based on Jeffrey Toobin’s book The Run of His Life: The People v. O.J. Simpson. It was Edelman’s contextual five-part documentary that especially made me recall the compelling imagery and the complex sociological and cultural subtext of those times.

Simpson’s story remains vivid to me even though it unfolded more than 20 years ago. I recall how work stopped at the law school where I teach. There was a television in the lounge, and our academic community was transfixed by the bizarre, complex, yet overdetermined imagery of the initial chase. Simpson, a well-known and even beloved sports hero who built a decent acting career, was purportedly a passenger in the back of the infamous white Ford Bronco with its darkened windows, driving down an interstate highway in Los Angeles with a fleet of police cars in slow-motion pursuit, their flashing lights aglow. In Baxter’s words, we all became “hypervigilant observers” of the scene, like Blake in Cheever’s story with a gun pointed at his belly, “forced through desperate circumstances to gaze upon the world in an abnormally attentive way.”

What was this scene about anyway? What was happening inside the white Bronco? Did Simpson really have the gun pointed at his own head? How could this mythic sports hero and entertainment celebrity possibly be a murderer? Was he trying to escape? Simultaneously, the scene already implicated an impossibly complex subtext of a dark postmodern social landscape that the realist Cheever could neither have anticipated nor imagined.

THE JOY OF SUBTEXT

In a chapter titled “The Art of Staging” from his book on the use of subtext, Baxter cites French novelist Gustave Flaubert’s famous dictum “To make anything interesting, you simply have to look at it long enough.” Baxter further observes: “In not knowing how to look ... we begin to fixate on the constituent materials and find ourselves diving under the surface.”

Of course, fate and circumstance—not artistic intentionality and design—shaped the initial imagery of the chase scene in Simpson’s story. In turn, the opening scenes quickly implicated complex themes and a cultural subtext about celebrity, sex, sports, race and racism, along with a murder mystery and a story about systemic corruption—all explored in Edelman’s documentary.

It is through staging that literary artists move from clotted details “beyond plot” toward directed subtext. Baxter observes how “literature is often born out of baffling physical details, an overabundance that tells us that the world’s surface is readable only when we don’t quite know how to pose the right question to it.”

Effective trial lawyers, like literary artists, know how to pose the right questions. Akin to Cheever and Allen, artful lawyers construct the staging, especially in confrontational and dramatic courtroom scenes, that directs their audience—jurors and judges, and sometimes the public—toward intended readings of dramatic subtext.

Simpson’s defense team constructed courtroom staging that transformed the “baffling [evidentiary] details” into an artfully composed subtext. Jurors interviewed in Edelman’s documentary, for instance, identified one singularly transformational scene at trial as the demonstration when prosecutor Christopher Darden had Simpson try on the bloodied black gloves that seemed too small for Simpson’s hands. This courtroom drama was the product of artful staging. As Toobin suggests both in his book and in the docudrama, the imagery was provoked and manufactured by the defense team.

In his closing argument, defense attorney Johnnie Cochran employed a well-crafted rhyming couplet making explicit the meaning of the crucial glove scene that he himself had instigated: “If it doesn’t fit, you must acquit.” What was equally masterful was how Cochran purposefully wore the black gloves as he spoke, as if the fingers of his black-gloved hand pointed toward his intended reading of the larger and unstated cultural and sociological subtext—raising issues of racism, conspiracy, police corruption and systemic injustice.

Likewise, the defense’s dramatic cross-examination of Los Angeles police detective Mark Fuhrman was another crucial scene staged for the jury. Here, the subtext exposed was Fuhrman’s inner thought processes beneath the surface of the words spoken during his direct examination and captured in transcripts. Unlike the gentle comedic literalism of Alvy Singer’s seduction of Annie Hall, this subtext was about Fuhrman’s racism, deceitfulness and fundamental dishonesty. In this well-staged and highly charged scene, defense attorney F. Lee Bailey was cast in the role of the “focusing agent,” akin metaphorically to Miss Dent in Cheever’s story when she holds a gun to Blake’s belly in the dismal classroom of the commuter train.

The defense employed artful staging throughout the trial, in which Simpson was acquitted, to direct jurors toward a purposefully composed subtext. In doing so, Cochran and his team pulled back the screen, moving beyond plot in the “trial of the century.”

Print and initial online versions of “The Inside Story,” January, should have identified Christopher Darden as a prosecutor in the O.J. Simpson murder trial.


Philip N. Meyer, a professor at Vermont Law School, is the author of Storytelling for Lawyers.

This article originally appeared in the January 2017 issue of the ABA Journal with this headline: "The Inside Story: Effective lawyers know how to use the concept of subtext in guiding jurors to recognize what a trial is really all about."