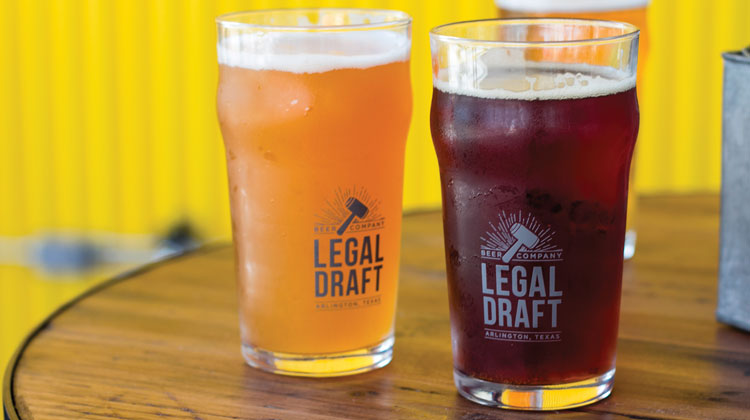 It’s no surprise there’s a lawyer behind the Legal Draft Beer Co., a microbrewery and taproom in Arlington, Texas. The corporate mission statement is called “The Beeranda Rights,” and it begins with the line, “You have the right to drink great beer.” The taproom calls its frequent customers “Repeat Offenders,” and the beers carry names such as Presumed Innocent IPA, Hung Jury Hefeweizen, Accused Amber and Bock Trial. There’s even a nonalcoholic offering called Moot Beer.

That lawyer—the one whose official title happens to be “chief justice”—is Greg McCarthy. He and his neighbor co-founded Legal Draft in 2015, and they’ve been successfully pouring on the legal humor to a growing audience of Texas beer drinkers ever since.

You and your business partner had been talking about going into the craft beer business for years before you actually launched Legal Draft. Was having a legal theme always part of the plan?

No. We actually went through three or four themes. Arlington is a baseball town, so we thought about baseball. We thought about calling it something about Arlington itself, but we found it hard to keep the interest going with those themes. Our marketing director is the one who first came up with the idea of using law as our brand. Up until then, I thought branding was what you did to cattle. She told me that the name has to tell a great story, and everything you do has to help with the telling of that story. Bless her for doing that because who knows what we would have come up with without her.

Law is definitely a great theme when it comes to funny names and phrases! I would totally buy a Mrs. Palsgraf Pale Ale or anything with Freestone Rider or Fee Simple Absolute on the label. How do you come up with Legal Draft’s clever beer names, and is it a difficult process?

We do occasional brainstorming sessions. Sometimes I’ll be reading a book, and something will prompt me to consider a name for a beer. But naming is actually a difficult thing in the beer business. There are 7,000 breweries in the United States, and you can run into some intellectual property problems. We thought of some great beer names, but our lawyer was like, “Great idea, but it’s taken.”

Obviously lawyers get the references, but have you ever had laypeople who didn’t quite understand the beer names?

Most people get it. I think there’s more confusion around the beer than the names, like the difference between an IPA and a Hefeweizen or what is an India Pale Ale.

I suspect there are people who might try your beer just because of the names or the colorful cans. Does that bother you?

Good quality marketing is as important to us as it is to everyone else. I could list a half-dozen beers that sell really well across this state that I don’t particularly care for, but they sell because they have a catchy name and the brewery does a great job marketing them. Rather than shake my fist at the wind, we recognize the importance of branding and packaging. Still, we try really hard to have good liquid that will get us that second sale.

I know that Legal Draft leaves the brewing to its resident German brewmaster, but have you ever tried brewing it yourself?

Not in any real sense. I have made some batches of beer in my garage. Some were good, but one was so bad I poured it all out, and you can still see the stains running down the driveway.

The Legal Draft website calls you a recovering lawyer, but you do still maintain an active practice, right?

I do still have a bar card, and I intend to keep it. The “recovering lawyer” is more about marketing. My practice is divided into three distinct areas: mediation, personal injury and a very small business consulting practice for small businesses, mostly friends of mine who are longtime clients. But that’s only a small slice of time because the brewery keeps me so busy.

What does being Legal Draft’s “chief justice” actually involve?

I spend a lot of my time on the sales and marketing and the creative side. I work on what we’re going to do next and what we’re going to call it. I also handle all of the distributor relations and anything that touches on compliance. I am probably CEO and general counsel, but we are not very formal on titles.

What was the most unexpected element of going into the craft beer business?

I must admit, the workload and the complexity of the work was something I didn’t accurately anticipate. When you have a business that has so many moving parts, it takes an awful lot of time, and the workload is like having three full-time jobs.

When we launched this thing, I didn’t have any training or experience. There’s no mental case file when you’re running a business that you’ve never run before. For the first three to five years when I practiced law, a lot of what I did was fall flat on my face. One of my mentors would throw a file on your desk and say, “Here’s your case.” When you asked what he wanted you to do with it, he’d say, “It’s your case, I want you to work it.” He’d say, the way to get to the point where you know how to handle it is to exercise good judgment. The way to learn good judgment is by exercising bad judgment. When you’re a young lawyer, you can talk to people in the position to help you. Now, with the beer business, what makes it hard is knowing it’s all on our backs. We have very little experience to fall back on.

What’s the coolest thing about owning a microbrewery?

It definitely changes the conversation. Like when you get on an airplane and the person next to you asks what you do. When I say, “I am a lawyer,” they start reading a book. But now when I say, “I own a brewery,” they’re like, “Hey, I like beer!” and I can ask, “What kind of beer do you like?” It’s funny, but the biggest smiles and the biggest uplift come when I talk to lawyers who are still practicing. They say, “Hey, take me with you!” I try to tell them, if I were to go back to practicing law full time, it would be like going on vacation. If all I did was show up and take depositions and have the occasional trial, it would be a cakewalk compared to the day-in and day-out battles in the beer business.

This article was published in the May 2019 ABA Journal magazine with the title "A Shot of Law and a Beer."