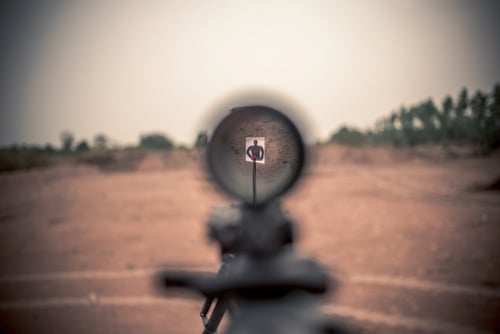 A U.S. Army reservist dropped his federal lawsuit against an eastern Oklahoma gun range on Tuesday after it agreed to remove its “Muslim-free establishment” sign.

Raja’ee Fatihah, a Muslim man who was represented by the American Civil Liberties Union and the Oklahoma chapter of the Council on American-Islamic Relations, sued the owners of Save Yourself Survival and Tactical Gun Range in the U.S. District Court for the Eastern District of Oklahoma in 2016. He claimed they asked him to leave their Oktaha business because of his religion, according to reports from the Associated Press, Tulsa World and Courthouse News Service.

Both sides agreed to the dismissal order.

“We are pleased that the defendants in this case decided to take down their anti-Muslim sign, and that they affirmed their commitment to complying with the law,” Heather Weaver, senior staff attorney for the Project on Freedom of Religion and Belief at the ACLU, said in a press release. “No customer should be excluded from a business based solely on their faith.”

Robert Muise, an attorney and co-founder of the American Freedom Law Center who represented the gun range owners, told the AP that his clients maintain that their sign constituted political free speech. They never banned Muslims from their gun range, he added.

“They’ve made it clear that it was a political-protest sign,” Muise said. “The only reason they even kept the sign up as long as they did is because (the Council on American-Islamic Relations) sued them, and they refused to be gagged by CAIR.”