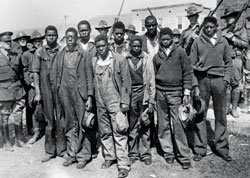 Three words have come to define racial injustice in the South: the Scottsboro Boys. Eighty-two years ago, a Southern Railroad freight train left Chattanooga, Tenn., bound for Memphis. Several teenage boys—black and white—and two white girls jumped on board. A fight broke out, and most of the white boys were tossed from the train. A posse in Paint Rock, Ala., stopped the train, and nine black youths ages 12 to 19 were arrested and taken to Scottsboro, Ala. The National Guard was dispatched to prevent mob violence. Five days later, on March 30, an all-white grand jury was convened. By the next day, all nine boys had been indicted for gang rape, a crime punishable by a minimum of 10 years in prison and as much as death by electrocution. The next week gave the term “speedy trial” all new meaning. Two lawyers—a Tennessee real estate lawyer with a drinking problem but no criminal law experience and a 70-year-old Alabama attorney who hadn’t tried a case in a couple decades—were appointed to defend Clarence Norris and Charles Weems, the first pair to go to trial.

The first trial lasted a day and a half. The second, third and fourth trials didn’t take nearly as long. By April 9, just 12 days after being arrested, all but one of the youths were convicted and sentenced to death.

On Nov. 7, 1932, the U.S. Supreme Court reversed the convictions, citing ineffective assistance of counsel and lack of due process—an opinion that is widely praised. Historically, the case will forever be known as one of the first times the Supreme Court substantively applied the due process clause of the 14th Amendment to declare that the right to effective assistance of counsel for indigent defendants is an essential component in the right to a fair trial.

The most dramatic moment in the entire case occurred on Feb. 15, 1935, when the Supreme Court reviewed the retried convictions of Norris and Haywood Patterson. Famed New York criminal defense attorney Samuel Leibowitz argued that black people had been excluded from being able to serve as grand jurors, and that Alabama officials later forged the names of blacks on grand jury rolls to cover their tracks. Justice Charles Evans Hughes demanded proof. Leibowitz produced the actual jury roll and a magnifying glass. One by one, the justices examined the rolls with expressions of outrage. Six weeks later, the court unanimously reversed the convictions.