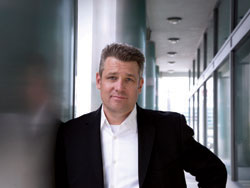 Martindale.com President Rod Stoddard denies that the company is on its way out, and that its utility is greatly diminished. Tools for finding information about lawyers and law firms, he says, still exist on the site, “and we’ll make them better.” Photo by Sal Owen.

We’re far from dead. That’s the shorthand response from the president of Martindale.com, Rod Stoddard, to questions about how much life remains in the legal stalwart Martindale-Hubbell after it became the subject of a joint venture between LexisNexis and Internet Brands in August 2013.

The “Is it breathing?” chatter began late last year when Kevin O’Keefe’s Real Lawyers Have Blogs asked in a post: “Does Martindale-Hubbell, as we knew it, still exist?”

O’Keefe admits to being nostalgic about the company. “Anybody who gets a pleading in the door, if you don’t know who the other lawyer listed at the bottom is, you’re going to look them up,” says the CEO and founder of Seattle’s Lexblog, which helps lawyers develop a strong online presence.

“During my time in practice, you looked them up in Martindale-Hubbell. For what it was worth, you could draw some conclusions about whether you were going to have a formidable opponent. “That’s also how I found my first job. I went to the public library, found Martindale-Hubbell, figured out which firms I wanted to contact, and knocked on doors.”

Anne Bothwell also goes way back with Martindale. “My very first job in-house was as a marketing and recruiting manager,” says the head of Bothwell Marketing in Sonoma, Calif. “We used to use it to headhunt people out of other firms.”

What triggered O’Keefe’s post? “My first thought reading the press release on the joint venture was confusion,” he explains. “I thought either LexisNexis sold the brand or the company. I’d feel bad if people were still paying for a service that’s not being offered anymore. … Lexis hasn’t said. Martindale hasn’t said. So I asked some questions. And I wasn’t the only one.”

Little more than a month later, the Dewey B Strategic blog declared Martindale-Hubbell had “bit[ten] the dust.” Among the post-mortem findings: Internet Brands has no mention of Martindale-Hubbell on its website, though it links to its other legal brands.

Stoddard says he’s shocked by the implication that Martindale is, at best, on life support. He blames it on rumors launched by competitors looking to poach Martindale business.

“It’s exactly the same as it’s always been,” he says. “Martindale-Hubbell has tried to connect attorneys to other attorneys so they could make decisions around ‘Whom should I work with?’ and ‘How do I stand vis a vis my competitors?’ All those things still exist, and we’ll make them better.”

The team in charge of what’s now called Martindale.com has begun tweaking the rating system with improvements to online navigation and expansion of its reviewing net. The changes have resulted in more lawyers being ranked each month, Stoddard says, though he says he doesn’t have data or goals.

“There’s a secret sauce that’s been around 104 years,” Stoddard says. “The challenge is to get people into that pipeline to get ranked and to review that so you don’t have one person giving a lawyer an A rating. We’re also tweaking who gets solicited to do reviews.”

Martindale also plans to increase sales to lawyers of the consumer leads it generates from Nolo.com—a self-help company it purchased in 2011 that is aimed at consumers—and Martindale’s consumer-facing Lawyers.com. It’s developing new products, too, though Stoddard declines to spill any beans.

Yet Bothwell wonders whether it’s too late for Martindale. “At one time, Martindale-Hubbell was the only game in town,” she says. “But it began pretty aggressive pricing strategies even back in the 1980s. There may still be benefits to it, but there’s a long-term pricing pressure that’s been building up.”

O’Keefe is also not sure it will be much of a blow to the profession if Martindale is pronounced dead. “People stopped paying Martindale-Hubbell for profiles quite a few years ago,” he says. “If you say, ‘You’ll be able to go to that tent to meet those people,’ and three-quarters of the people in the tent have left, what value was it?”

The issue may be bigger than the future of any single mainstay in any profession. “I used to have all the Martindale-Hubbell books in my office,” says Bothwell. “You think these things will never go away. But with the Internet, there’s a lot more than Martindale possibly going away, isn’t there?”

This article originally appeared in the April 2014 issue of the ABA Journal with this headline: “Early Mourning? The venerable Martindale-Hubbell says it’s still viable, vital.”