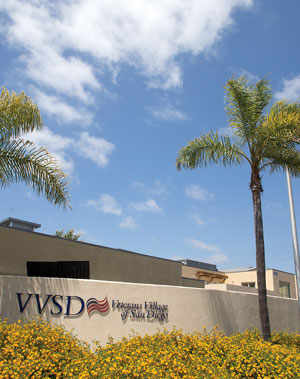 The young woman, who did her military service after Sept. 11, had been raised in a “very, very difficult environment,” says Bowman, program director of the veterans rehabilitation center at the VVSD. When she arrived, she was on probation in four different jurisdictions. She was so angry that Bowman thought she’d never meet the agency’s behavioral standards.

But over the next year, the veteran did the hard work required of her—work around the agency, work on the personal problems that led her to that point and, eventually, work on her legal problems. Much later, she returned to the office.

“She came in with tears in her eyes and said that for the first time since she was 12 … everything [legal] was taken care of,” Bowman says. “She had cleaned that wreckage of the past.”

Legal matters are a vital part of the agency’s work addressing homelessness. Once a month, it hosts San Diego County’s homeless court, which allows residents to clear criminal matters from their records without a risk of jail time and impossible-to-pay fines. Residents with civil matters can take them to the Veterans Legal Assistance Clinic, which uses students at the Thomas Jefferson School of Law in San Diego to clear obstacles such as bankruptcy and child support arrears.

And once a year, both programs participate in the agency’s Stand Down event, three days during which volunteers descend on a field to help veterans meet immediate needs, including food and showers, but also dentistry, job counseling, addiction recovery, legal services and more. 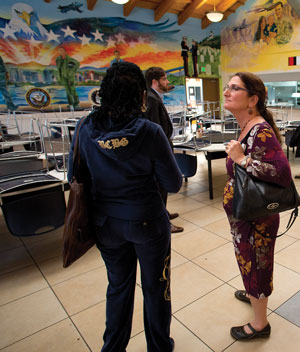 During this year’s ABA Midyear Meeting, the veterans agency welcomed conference attendees who toured the facilities. The tour was sponsored by the ABA Commission on Homelessness and Poverty.

The legal services the agency provides are an essential part of getting people back on their feet, says Steve Binder, a San Diego County public defender and a co-founder of the homeless court.

“If you have a warrant [against you], you’re not able to reach out for a lot of homeless services,” says Binder, a former chair of the ABA Commission on Homelessness and Poverty. “If you have a conviction, you’re not able to obtain employment. If you have fines, it affects your credit report and it looks to many employers like you’re unable to take care of yourself. And so you’re never able to really pull yourself out of the hole that you’re in.”

The Veterans Village of San Diego is in an unassuming part of the city, sandwiched between the airport and train tracks. But Marilyn Cornell, clinical director for the veterans rehabilitation center, said in February that “magic happens here.”

That magic requires a lot of hard work and a lot of time. The village uses a housing-first model, which means homeless veterans get a bed and meals immediately. But they’re “put through the paces” right away, says Bowman—expected to get up at 6 a.m. and help maintain all the shared facilities, which include bunks, a cafeteria, a gym and more.

After an assessment period, the agency requires all of its clients to start working on the issues that contributed to their homelessness—and the things that went by the wayside. That typically means addressing addiction, physical and mental health, job skills and legal problems.

“If you get four or five parking tickets and you’re living in your car, they will literally boot your car and tow it away,” he says, “so that you end up literally living on the streets.”

The homeless court program, the nation’s first, evolved out of the first year of Stand Down, held in 1988. A survey of participants found that the single most commonly cited issue was outstanding warrants. And at least in those days, Binder says, homeless San Diegans actively avoided court because they knew they’d be jailed or charged fines they couldn’t pay.

So the homeless court provides alternatives. Participants are typically sentenced to work around the shelter. They are represented by public defenders, and they submit evidence showing that they’re working on the problems underlying their legal trouble.

The homeless court handles only misdemeanors, including serious crimes such as battery as well as crimes more typically traceable to homelessness, like shoplifting. Veterans with felonies related to their military service go to San Diego County’s veterans court, which also relies heavily on alternative sentencing. That’s not on-site at the village, Binder says, but the agency treats about a third of the participants.

Law enforcement sometimes dislikes seeing so many cases dismissed, Binder says. But in the end, they realize that “they’re getting a lot more bang for their buck.”

“They’re getting some significant resolution to these cases,” he says. “Because these people will no longer be on the street. They’re going to be our neighbors again.”

Binder did a 2002 report on the homeless court program for the ABA commission, directing those with questions about establishing similar programs to contact the commission.

Chair Theodore W. Small says the commission has helped establish 40 to 45 homeless courts around the U.S., Canada and Mexico—and it’s being approached more than ever since the February launch of its anti-poverty initiative, Collaborate to Advocate: Lawyers and Communities Working to End Poverty.

“In each place we have gone, we have promoted homeless courts as one way local communities can address poverty,” says Small, a solo business attorney in Deland, Florida. “It combines the community with the judicial system in a collaborative way.”

“They were always asking about other odds and ends, civil and administrative,” he says.

So the agency got in touch with the Thomas Jefferson School of Law, and the Veterans Legal Assistance Clinic was born. Law professor Steve Berenson leads the clinic’s team of law students—some of whom, in military-heavy San Diego, are veterans themselves.

Family law is a major part of the clinic’s work, Berenson says. Child support tends to get pushed aside when someone is descending into homelessness, but when VVSD residents start rebuilding their lives, the issue can come back with a vengeance.

“We’ve had clients who … get that first paycheck and that $1,000 is garnished,” says Berenson. “And with a garnishment of $1,000 a month, there’s not much money left over to pay food and rent and things like that.”

In this, the San Diego County Superior Court and the Department of Child Sup-port Services are allies. The department has a good relationship with the agency, Berenson says, and the court’s family support division is a regular at Stand Down. In simple cases, the clinic doesn’t even need to get involved.

“We’ve gotten visitation, and ultimately shared custody, for veterans with children who they’ve often been estranged from for a long period of time,” he says. “That’s always a very gratifying part of our work.”

The clinic handles plenty of other civil matters: bankruptcy, expungement, public benefits, military discharge upgrades and more. It turns down anything for which there might be appointed or contingency-fee counsel available.

Cornell, the clinical director for the rehab center, says the agency also works with the public defender’s Clean Slate Clinic, which helps expunge convictions and take care of parking tickets that might block its residents from jobs and clean credit reports—vital parts of living independently.

For the young woman Bowman described, a clean record was life-changing. When she came back to visit a year after she graduated from the agency, she had a management-track job with a high-end retailer.

“She looked like a different human being,” says Bowman. “I think she felt a sense of freedom that she was able to become who she’d always really wanted to be.”

This article originally appeared in the June 2016 issue of the ABA Journal with this headline: “Valuing Veterans: Agency provides holistic services, including homeless court and legal aid.”