When letting a bill go unpaid can be good for business 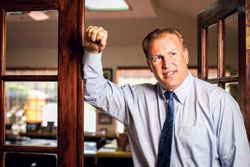 Miami lawyer Scott Saul tries to look at the big picture when deciding whether to pursue clients for unpaid bills. He believes that hardline tactics can be counterproductive. “If I come down hard on them, I’ve lost them as a referral base forever.” Photo by Sonya Revell.

Scott Saul, a Miami criminal defense attorney, has had his share of clients skip out on their bills. But rather than send threatening letters, hire a collection agency or sue for the unpaid balance, Saul chalks up the loss.

Taking a hit rather than chasing the money, Saul says, is actually good business.

Saul says it’s best to keep things civil. “If you have a falling-out over money, then the next time they need a lawyer—and many of my clients are repeat customers—they’re not coming to you,” he says. “Sometimes it makes sense to say, ‘I’ll tell you what, I’m going to give you a break. So refer me business and I’ll wipe out your debt to me.’ “

For solos facing delinquent clients, the trick is striking a balance and considering a cost-benefit analysis. How much time and money will you spend trying to recover fees?

Houston civil attorney Scott Rothenberg says filing suit is a last resort. “Litigation is always a time-consuming activity,” Rothenberg says. “It’s very draining, and it’s something you want to limit as much as possible because it infringes on otherwise productive time you could be spending with other paying clients.”

Two years ago Rothenberg defended the owners of a small business accused of fraud, which put them at risk for more than $2 million in damages. Before the trial, Rothenberg learned his clients were short on cash and could not pay the mounting legal fees.

“The amount of risk I was incurring was enormous, given the overhead I had,” he says. “We were willing to take the risk rather than abandoning them. I knew at the outset that they were going to make a good-faith effort to pay their bill.”

They won the case. “I’ve received periodic payments from them, but it may take several years for them to be in a position to take care of their obligation,” he says. “I am very accommodating when I believe a client is working with me in good faith.”

On the other hand, Rothenberg recently had to take a harder stance. This past November, he won two judgments to collect unpaid fees from a former client on an insurance matter, and was awarded $57,999.63 in attorney fees for the underlying suit and $148,000 for the fee suit.

The risk with filing suit to recover fees is that it opens up lawyers to counterclaims of malpractice if the case did not have a favorable outcome, and that can aggravate an already aggravating situation.

Thomas J. Watson, a senior vice president at Wisconsin Lawyers Mutual Insurance Co., a malpractice insurer, has spoken to many lawyers who have faced this dilemma. “There is no silver-bullet answer,” he says. “It’s a personal business decision every lawyer must make.”

The best advice is to be proactive—to secure an adequate retainer with a clear set of expectations up front. “Have effective communication. Use your bills as communication tools,” Watson says. “They should not be mysterious to clients.”

Watson, who practiced family law, says playing hardball is not always the best way. He says third-party mediators or alternative dispute resolution can also work. “Don’t keep sending threatening notices,” he says. “Reach out to them and see if you can work something out.”

Says Saul: “In the end, it does you no good to have a falling-out with a client. It is really important for me to please clients. For them to walk out and like me.”

This article originally appeared in the July 2014 issue of the ABA Journal with this headline: “Making Lemonade: Letting a bill go unpaid can be a good thing.”