When the Judge Is the Jury 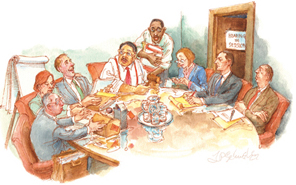 The bar association’s latest evening program with Angus and Judge Horatio Standwell was about bench trials. I was afraid the topic wouldn’t draw very well, but when Angus offered to pay 2-to-1 on a bet that it would fill the room, I backed down.

Angus was right. Whether you’ve got a pretrial motion, a hearing on an injunction or a full bench trial, you’re in one of those situations where the judge is the jury for all or part of the case. So the bar association didn’t just fill the auditorium; it had to use closed-circuit TV for two adjacent rooms as well.

Five minutes before the program started, law professor Vince Warbler was in the auditorium, trying to sell copies of his book Killer Kross, saying it had several valuable techniques for bench trials.

At 7:30 sharp, Judge Standwell said, “Angus, what’s the worst mistake a lawyer can make in a bench trial?”

Angus paused just a moment, then smiled and said, “It’s something that’s done by one side or the other—often both—in 80 to 90 percent of all kinds of bench trials. The general practice is to submit written statements of the facts you expect to prove well in advance of the trial or hearing. These are not the pleadings. Those were served long ago. The statement of facts is your chance to tell the story of the case to the judge who’s going to try it.

“And the mistake most lawyers make is to write dry statements of facts that may be legally sufficient, but that read like they were written by a committee of law professors who were hunched over piles of dusty law books.”

I looked toward the back and saw Professor Warbler scowling.

JUDGES ARE PEOPLE TOO

“In a bench trial,” said Angus, “you’ve only got one juror: the judge. And judges don’t like to look stupid. So even mediocre judges usually try to learn as much as they can about the case in a bench trial before it starts—which they don’t do nearly so often in jury trials.

“Think what this means,” said Angus. “The first lawyer to make the facts come alive in a bench trial has a tremendous advantage.

“If you do it well, your statement is probably the most important communication you will have with your ‘jury’ in the entire case.

“You are talking directly to a fellow human being about the ‘gut stuff’ of life. What’s right and what’s wrong. Fair and unfair. Just and unjust. This is all about the power of a story to grab the heart of a fellow human—not something that is going to be measured for its adequacy by a professor who is checking to see if you found all the possible legal theories in the case. You already did that weeks ago with your pleadings.

“Facts—not arguments, legal conclusions or academic pedantry—are what have the power to persuade.”

At this point there was some commotion in the back of the room. I turned to see a disgruntled Professor Warbler muttering and pushing his way out the side door just as Sandy Garcia stood up and said, “After writing this story, do you still give an oral statement of the facts at the start of the trial?”

“No question,” said Judge Standwell. “The eyes and the ears are the best roads to the inside of your jury’s head. Why just use one path when two are available?”

“But what if the judge says, ‘Counsel, I’ve read your statement of facts, so you may proceed with your first witness’?” said Sandy.

“You still want to grab the moment if you can,” said Angus. “Say, ‘Thank you, your honor. I do have one key point that will help make our case clear, and I promise to be mercifully brief.’ ”

“But does that actually work?” said Sandy.

Judge Standwell smiled and said, “Just last week a lawyer was in my courtroom and said, ‘Your honor, I would appreciate having just two minutes to focus the court’s attention on the most important question in this case.’

“How could I say no? So I put my pock- et watch on the table where the lawyer could see it, and he did a beautiful job in less than a minute.”

“Setting up the courtroom,” said Standwell. “Most American courtrooms are designed to let the judge be seen by everyone and, incidentally, give the judge a perfect view of the back of the witness’s head. Even when there’s no jury, most judges still hold hearings in their regular courtrooms, sitting in the highest spot in the room. And they’re still looking at the back of the witnesses’ heads—cutting down the effectiveness of both direct and cross-examination.”

COME DOWN FROM ON HIGH

“It is essential for the only juror in the case—as well as everyone else—to actually watch an honest witness testify on direct and a dishonest one squirm during a powerful cross,” said Standwell.

“The best way to do that is to hold the trial in a good-size conference room around a large, oval table. Every­thing—from oral testimony to handling electronic demonstrative evidence—is easier. What’s more, everybody sees everybody else through the whole trial.

“And one of the biggest advantages over the traditional courtroom is that the lawyers get to ‘read the jury’ all through the case. And since the judge can—and often will—ask questions, you’re always aware of what’s on the jury’s mind,” said Standwell.

“The conference room setting also helps you be a better cross-examiner,” said Angus. “You’re not strutting around and posturing in front of an audience of 12 jurors, trying out those nasty bits of sarcasm on the wit­ness. You’re doing what you ought to do on cross-exam—telling ‘the rest of the story,’ what was left out of direct—with short, leading questions that give the wit­ness no wiggle room for evasive or misleading answers.”

“Another thing,” said Standwell. “The conference room setting also has an important effect on the dynamics of expert testimony.

“For my money,” said Standwell, “the more you can get your experts to explain economics, physics and medicine in plain English—the way the late Carl Sagan made simple sense out of intergalactic space—the better you will serve your case.

“The formal pageantry of 12 jurors, the clerks, bailiffs and court reporters, two or three sets of lawyers and a black-robed judge drives most experts back to the safety of the home cave—which for them is the world of incomprehensible jargon.

“A judge wearing a business suit instead of a robe in a conference room with everyone seated around an oval table goes a long way to make the whole process more human.

“And in my court the lawyers have some important work to do. Start with your witness’s ‘curriculum vitae,’ which you should call a ‘professional resumé.’ Give a copy to the court and opposing party well before trial—that’s one of my standing rules for bench trials. The same rule applies to diagrams, charts, photographs, X-rays and mathematical calculations. If they’re not served on time, they’re not admissible. The only exception is for simple whiteboard, flip-chart or blackboard work.

“The party calling the expert needs to introduce a written summary of the witness’s opinion and the facts on which it’s based 30 days before trial. Normally, this should be limited to 25 double-spaced, typewritten pages except in extraordinary situations.

“Finally, in trial, expert qualifications are limited to 10 minutes at the most. Everyone has already seen them.”

Then Angus said, “Just a couple of points to wrap it all up.

“First, when you finish the direct examination of your expert, encourage the judge to participate: ‘Your honor, do you have any questions for the witness?’ It’s a great way to find out what the judge is thinking about.

“Second, you can see why you want to pick experts who really make their testi­mony interesting. If the judge walks out of the room feeling he or she has learned something valuable from your witness, you’ve presented an important part of a winning case.”