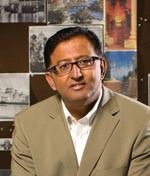 On his first day as a Uni­­versal Studios labor lawyer, Arnold Peter was ordered to handle a top-secret crisis breaking in a conference room. “It was so secret, my boss wouldn’t tell me what it was,” Peter says. He flung a door open and saw Steven Spielberg fuming over a giant pile of dinosaur skins.

Spielberg was upset because the skins looked fake.

True, they would have to be fake, since dinosaurs no longer roam the earth. But Spielberg thought the skins looked too stiff and rubbery for the robot dinosaurs gracing the new Jurassic Park ride in Universal’s theme park in Hollywood. Peter thought the skins looked fit for Fred Flintstone’s bungalow, but he listen­ed closely to Spielberg and learned.

“Nothing I learned in law school or experienced in private practice pre­pared me for this issue,” Peter re­calls. But he negotiated an agreement that pleased Spielberg and the skin vendor. Now, Peter thrives in a practice that demands “engineering knowledge, artistic design and some law.”

Theme parks are still a major part of his workload. Peter spends as much time with mechanics, designers, special effects gurus and sound technicians as he does with actors and producers.

His daughters, ages 8 and 9, consider his theme park work the coolest part of his job. His major Hollywood moment was meeting Gov. Arnold Schwarzenegger at the unveiling of a Terminator 2 theme park ride.

“A guy dressed like the Terminator rode a motorcycle that seemed to smash into a giant movie screen and became part of special effects action,” Peter recalls. “The ride incorporated 3-D virtual reality technology the U.S. Defense Department uses to train fighter pilots.”

For a lawyer, theme park rides involve liability, patent issues and fascinating labor disputes with movie screenwriters: Writers can claim they are owed money for a ride based on a script they wrote, even if they had nothing to do with creating the ride.

“If a ride is based entirely on elements of the movie, the studio can claim it already bought the rights to his script and the ride is merely a promotion, like a movie trailer or TV ad,” Peter explains. “But if the ride is based on the movie and involves new characters or themes, the writer can claim the ride is actually a sequel. Then he can ask for residuals.”

Recently, Peter has been helping introduce theme parks to India, where the concept is almost unknown. A client is planning a park near Bangalore to include a domed winter wonderland (with snow imported from Sweden) and a re-enactment of the Last Supper with a robot Jesus.

“English is the universal language of India’s professional class; in court, cases are litigated in English,” Peter says. “We can rely on local counsel’s knowledge of Indian safety and occupational regulations.”

Peter treks to India twice annually. He has also advised Bulgaria and Belarus when the countries, finally free of the Soviet Union, reformed their employment codes.

At home, American unions struggle to retain clout, yet they remain Holly­wood powerhouses. “Hollywood labor contracts tend to be deliberately ambiguous,” Peter muses. “So much of the industry depends on personal relationships and trust. You have to preserve collegial relationships, even in a dispute.”

One of his most recent clients may test that theory. He’s representing the wife of the paparazzo who dated Britney Spears, mother of Hollywood melees. It’s a pretty heady atmosphere for a man from a family of ministers.

“They’re sure, even though I work in Hollywood, I’m immune to the dark side,” Peter says with a laugh.