Wine collector broke laws, paid price; will bottles be 'decanted' down the drain? 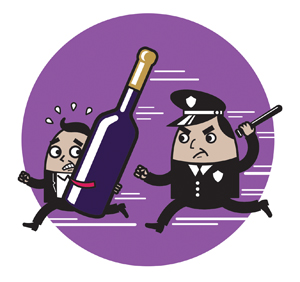 When booze began flowing legally again as Prohibition ended, regulations had to be put in place to ensure that Uncle Sam got his taxing share. But the 21st Amendment essentially left it up to the states to set controls on the importation, distribution and sale of hooch in their various jurisdictions.

That, to Pennsylvania lawyer Arthur Goldman's regret, is where a drawn-out tale of woe begins, with an impending ending sad enough to drive a fellow to drink.

While most states use private licenses to control their liquor business, some—known as alcoholic beverage control states—have monopolies over its wholesaling and retailing. And control states exercise varying degrees of regulation, from moderate to draconian. The Keystone State is considered to be one of the latter.

Goldman, a resident of Malvern, happens to enjoy a good bottle of wine, which hardly puts him in an exclusive category. What does set him apart is that he and his wife, Melissa Kurtzman, also an attorney, amassed a collection numbering more than 2,400 bottles, which can pose quite a problem when it comes to storage. But the state plans to relieve him of that burden permanently—by flushing it all down the drain.

Goldman and Kurtzman gained some measure of renown for their collection and, as a result, were granted access to exclusive inventories that were off-limits to the general public. Their legal difficulties, as reported by the Pittsburgh Post-Gazette, began after they compiled a list of friends and acquaintances who shared their passion for fine wine, and allowed them to pool orders and share costs.

Acting on an anonymous tip in March 2013, state police—posing as interested buyers—emailed Goldman to obtain the 97-page list of wines available from his cellar or through orders he would place. The wine would be delivered to Goldman or to his New Jersey home, where the collection was previously housed. He would then distribute it to the various buyers.

Oops! Under Pennsylvania law, it is illegal to have wine shipped directly to one's residence. It must instead be shipped to and picked up from a state liquor store.

Other published accounts of the state's surveillance of the couple indicate that undercover officers made several online buys from Goldman and even visited his home, where he showed them his cellar.

In January 2014, Pennsylvania state police raided the couple's home and confiscated the thousands of bottles. The Post-Gazette quotes First Assistant District Attorney Michael Noone in a news release as saying "the defendant was running a highly organized, high-volume illegal business to make money."

Goldman faced 15 misdemeanor counts and entered a two-year rehabilitative program for first offenders in which he admitted no guilt and can have his record expunged upon completion.

The case is currently in Chester County Common Pleas Court, where Goldman and Kurtzman are fighting for the return of the wine, which is being held in state storage. The state seeks to destroy the collection, which some say might be happening already in the non-temperature-controlled facility.

Government overreach? Maybe, though one could argue that Goldman knew, or should have known, the rules. But however it ends up, neither party will have much to pop its cork over.

This article originally appeared in the April 2015 issue of the ABA Journal with this headline: "Vintage Vexation: Wine collector broke laws, paid price; will bottles be 'decanted' down the drain?"