Women's experiences differ from men's and affect their longevity in law, survey finds 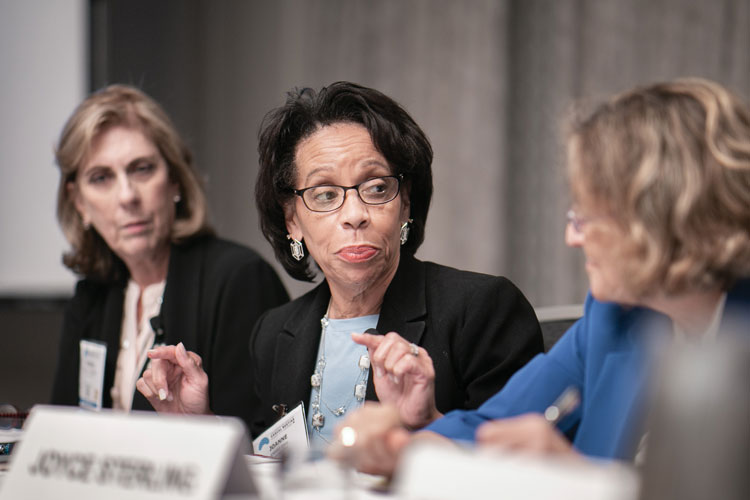 Roberta Liebenberg (left) and JoAnne Epps at “Long-Term Careers for Women in Law: What’s Pushing Women Out and What Can We Do to Keep Them in the Profession?” Photo by Kathy Anderson.

Women in law already face unique challenges, and a new study appears to show that a large number of female attorneys with more than 20 years of practice are leaving the profession.

That issue was highlighted during the ABA panel discussion “Long-Term Careers for Women in Law: What’s Pushing Women Out and What Can We Do to Keep Them in the Profession?” during the ABA Annual Meeting in Chicago.

Preliminary results from a survey of 1,300 respondents from the nation’s 350 largest firms, conducted in partnership with ALM Intelligence, underscored the disparate challenges, stereotypes and burdens female lawyers face compared to their male colleagues, even at the senior level. For example:

“Too many great minds are leaving the profession,” said JoAnne Epps, executive vice president and provost of Temple University and former dean of Temple Law School. “Everyone needs to care about that—not just women, not just men. I really believe that what we bring is valuable, and our loss is significant. If people recognize it’s a crisis, it’s a step in the process to fix this.”

Dismal longevity statistics for senior female lawyers prompted a groundbreaking focus on the issue by the ABA under the leadership of then-President Hilarie Bass. Her initiative, “Achieving Long-Term Careers for Women in Law” included focus groups and research to determine best practices to promote success for senior female attorneys.

“We don’t say ‘fix the women;’ we say let’s fix the workplace so these talented women have a good basis for staying in the legal profession,” said Stephanie Scharf, co-chair of the presidential initiative’s advisory council and a partner at Scharf Banks Marmor in Chicago.

Joyce Sterling, senior researcher for the presidential initiative and emeritus professor of legal ethics and the legal profession at the University of Denver’s Sturm College of Law, said: “The set of social constraints had a much larger impact on women than men.”

But there was one common denominator: Men and women both had comparable overall satisfaction with the practice of law, a statistic that researchers say underscores that women don’t want to leave—they feel pushed out.

“Just having the data is critical,” said Roberta Liebenberg, co-chair of the initiative’s advisory council and senior partner at Fine, Kaplan and Black in Philadelphia. “We really hope to switch mindsets so law firm leaders start understanding the importance of retaining senior women lawyers. Because if senior women lawyers keep leaving the profession, we are never going to get over 20 percent equity partners because we won’t have the bodies to do it.”