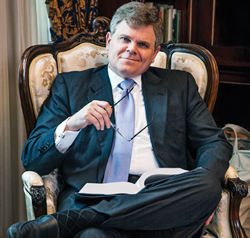 In some primitive cultures, names are thought to possess magical powers: Knowing someone’s name gives you some degree of power over that person. In those cultures, one’s true name is often known only to close family members—and another name is used by outsiders.

In a “sophisticated” culture like ours, we discount the power of names—perhaps too much. Lawyers certainly do. As a profession, we don’t seem semantically savvy enough to know that names make stories more vivid and interesting. More than that, they powerfully influence how we understand problems—in far subtler ways than most of us realize.

The living/dead antithesis is telling, though. It’s no use arguing against a living Constitution because no one wants its alternative if that’s a “dead Constitution.” Debate over.

But just what is the living Constitution? The phrase can be seen as a mid-20th-century euphemism for a document whose meaning morphs year by year according to the personal preferences of a nine-member committee in Washington—one that sits as a perpetual constitutional convention, discerning new meanings fairly often.

Consider our other example: realism. The term is commonly contrasted with formalism. Would you rather have a realistic judge or a formalistic judge? Almost anyone answering that question would choose the former.

But those names can also be misleading. One might equally well ask whether you’d like a willful judge whose personal policy preferences influence legal decisions or a judge who hews closely to the words of the statute or contract at issue. Almost any lawyer answering that question would choose the latter. But we don’t have familiar terminology for this choice: perhaps willful judge vs. self-abnegating judge. (Most lawyers don’t even know the verb abnegate.)

Judge Richard A. Posner, a self-proclaimed realist, described what that term means in a Duquesne Law Review article: “a judge who … does not … have a ‘judicial philosophy’ that generates outcomes in particular cases”; who “is a ‘loose constructionist’ ” and does not follow “the literal meaning of the text”; who “wants to get as good a handle as possible on the likely consequences of a decision”; and who “wants to do what he can to improve the system.” In days of yore, such a judge was decried as “willful”: someone who imposes his or her own will on the law rather than following it.

A formalist, by contrast, is a judge who reasons deductively. In a criminal case, for example, a formalist would want to know precisely (in terms) what conduct is prohibited or prescribed, and then what (precisely) the defendant has done and whether those actions run afoul of the prohibition or prescription. Often the deduction will require subtle and close reasoning. It’s rarely a simple-Simon matter, but that’s how a formalist approaches a legal problem.

The cynical realist (I refer to no one in particular) says that all judges are political. They’re all imposing their individual wills on the law because no judge has an objective lens for viewing the law. So we shouldn’t criticize judges who are willful: They’re just being honest and candid. The others are either deluded or dishonest.

The debate, you see, quickly descends into a series of counteraccusations and denials. Judge Posner, for example, refers to “Judge Alex Kozinski of the 9th Circuit, in an essay surprisingly denouncing legal realism (he is a legal realist).” That’s called a tu quoque: You’re another.

Let’s get back to labels—to names. Can you see that, as a matter of English usage, realistic is more favorable than formalistic? Explaining the labels takes too many words. I’d wager that many people who would prefer a formalistic judge wouldn’t have the patience to learn precisely what the labels mean. Yet the labels themselves are highly influential. In other words, the debate can be over once the labels are assigned.

Ah, but what if you’re suing American Airlines or Bank of America? Then my tack would be to call the airline “the Carrier” and the bank “the Bank.”

A SWINDLER BY ANY OTHER NAME …

Let’s turn to another point: “Defendant” vs. “Davidson.” Should we use real names for parties? Of course! That’s your default, your only hope of writing vividly and memorably. Judges read all day about plaintiffs, defendants, appellants, appellees, petitioners and respondents. Capitalizing the words doesn’t make them anything other than common nouns. Calling a litigant by one of these generic names, generally speaking, is about as sensible as calling characters in a novel “Protagonist” and “Antagonist.”

What if you’re a prosecutor? It’s no different. Banish the thought that your best ploy is to dehumanize the defendant. You’re prosecuting someone who has done bad things. Bad facts will stick to a name. To use Defendant is to use a Teflon label—and is therefore far less interesting, much less incriminating.

Yet our profession is funny about names and labels, especially initialisms. We’re famously insensitive to their effects. How else to explain this sentence from a Social Security benefits case involving short-term disabilities: “Plaintiff employee was approved for STD benefits and was in fact given STD.” No doubt, quite a vivid—and unfortunate—example of the power of naming.

This article originally appeared in the February 2015 issue of the ABA Journal with this headline: “The Power of Naming: Word choice influences the way jurors understand your argument.”

Bryan A. Garner (@BryanAGarner) is the president of LawProse Inc. of Dallas. He is the editor-in-chief of Black's Law Dictionary.