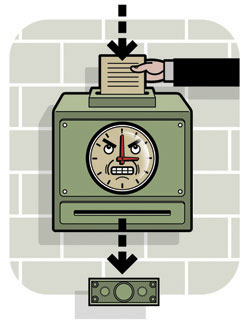 How much thought do you put into dressing yourself in the morning? Very little, probably (especially if it’s pre-coffee). That’s because it’s just part of the routine, something that has to be done before beginning the workday.

But what if each workday you had to put on, say, protective gear—jumpsuit, gloves, boots, hard hat, etc.—in a locker room, and then reverse the process at the end of the day? That’s time-consuming, says a group of Indiana steelworkers, and they want to be paid overtime for doing it. Should they be?

Well, they’ve managed to move the discussion to the highest court in the land. After a district court and the 7th U.S. Circuit Court of Appeals at Chicago ruled against them, the U.S. Supreme Court agreed to hear the matter this month. Sandifer v. U.S. Steel Corp. will resolve what is meant by “changing clothes” under Section 203(o) of the Fair Labor Standards Act, and the result could affect employers nationwide.

You see, it’s not only steelworkers who object to the unpaid time spent changing clothes. Nurses in the metropolitan Denver area filed suit in a Colorado district court seeking overtime pay for the time they spend changing into and out of scrubs. Cops in Teaneck, N.J., wanted extra pay for putting on their uniforms and attending twice-daily roll calls. And there are surely others. There’s even a catchy name for these types of suits: They’re called “donning and doffing” cases because employees don the duds before the workday begins and doff ’em when it’s over.

And while we’re on the topic of after-hours work-related activities, what about those nice new smartphones that bosses sometimes hand out to employees? It might seem like a “Thanks for all the good work” gesture. But it’s more likely a “Now I can reach you anywhere” gesture. By accepting it, you’ve just made yourself available 24/7.

Suddenly, the line between work time and personal time becomes a bit blurrier. The boss interrupts a family dinner with a call or email that you’re obligated to answer or address. You’re starting to get whiffs of “mission creep.” What do you do?

A Chicago cop decided to sue the city on behalf of himself and fellow officers for making them respond to emails and phone calls while they’re off the clock. Like Sandifer, Sgt. Jeffrey Allen’s lawsuit also takes the FLSA approach, but instead it focuses on unpaid overtime compensation due to required off-hours use of department-issued smartphones.

All of these cases are sure to have significant impact throughout the labor market, especially once the Supremes weigh in. Employers know they’ve got a good thing going when they can squeeze extra work out of employees outside the normal workday. (And what about Leap Day? Is “the Man” getting an entire unpaid day out of us every fourth year? Think about it.)

But there has to be some give and take. Professionals in all fields have to address urgent situations off-hours occasionally, and employers have to be reasonable in what they ask employees to do. If only it were that simple.

This article originally appeared in the November 2013 issue of the ABA Journal with this headline: “Donning, Doffing and Dialing: Workers object to spending time that’s not on their employers’ dime.”