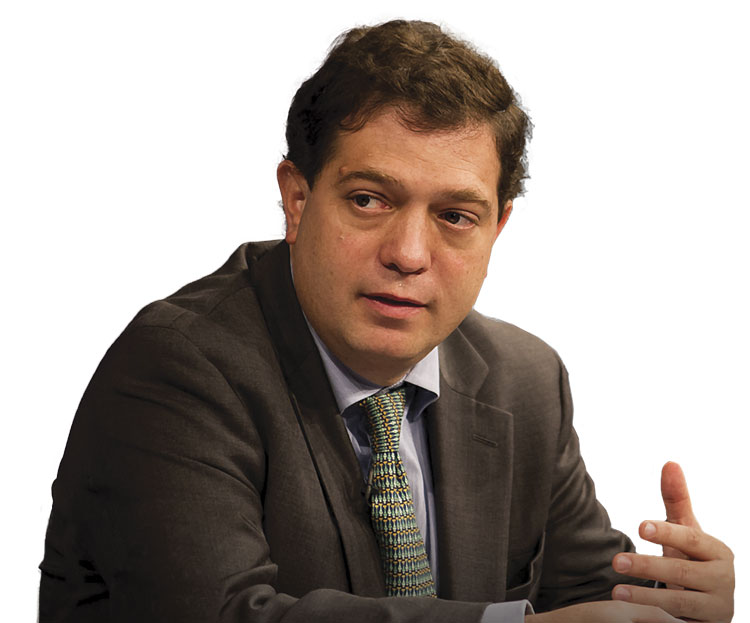 Juan Carlos Botero: The goal "is not to shame and blame the governments, but to bring issues into perspective." World Justice Project

The full story of how effectively the justice systems of various nations operate can’t be told simply by rankings. But by collecting data from around the globe, the World Justice Project—which began in 2006 as an ABA initiative—provides fascinating reference points for countries’ progress in its annual Rule of Law Index.

It’s hard for anyone—even experts—not to linger over the tables that summarize how well the nations included in the index rank in comparison to one another.

It’s also difficult not to notice, for instance, that the United States comes in at No. 18 in the overall global rankings, just behind the Czech Republic and just ahead of the Republic of Korea.

At the top of the global rankings is Denmark, followed by Norway, Finland, Sweden and the Netherlands.

But the goal of the index, says Juan Carlos Botero, the executive director of the World Justice Project, “is not to shame and blame governments but to bring issues into perspective.”

Botero has worked with the World Justice Project since its early days, when it was founded by William H. Neukom of Seattle as one of his key presidential initiatives for the ABA.

The World Justice Project be-came an independent nonprofit organization in 2009, with offices in Washington, D.C., and Seattle.

“We have deliberately downplayed the numerical rankings,” Botero says. “Rather, we focus attention on the underlying data.”

The rankings show that “the United States has lagged in providing justice services for several years,” he says. “But when you can show how it’s lagging” in comparison with countries in Western Europe and the Asia-Pacific region, “it helps to focus attention on making improvements.”

The Rule of Law Index has followed the same basic approach since it was introduced in 2010, when it measured adherence to the rule of law in 35 countries. The 113 nations—including 11 new ones—measured in the 2016 edition account for some 95 percent of the world’s population, Botero says. Most of the countries not included in the latest index are smaller nations, primarily in Africa. The index also provides comparative rankings of nations by region and income group.

The WJP acknowledges that the rule of law is hard to pin down.

“The rule of law is notoriously difficult to define and measure,” states the introduction to the 2016 report. “A simple way of approaching it is in terms of some of the outcomes that the rule of law brings to societies—such as accountability, respect for fundamental rights or access to justice—each of which reflects one aspect of the complex concept of the rule of law. The WJP Rule of Law Index seeks to embody these outcomes within a simple and coherent framework to measure the extent to which countries attain these outcomes in practice by means of performance indicators.”

The index’s analytical framework is built on an inverted pyramid of elements, starting with what the index describes as four universal principles of the rule of law:

• Government and private entities are accountable under the law.

• The processes by which laws are enacted, administered and enforced are accessible, fair and efficient.

• Justice is delivered in a timely fashion by competent, ethical and independent representatives and others who are supported by adequate resources and reflect the makeup of the communities they serve.

A country’s adherence to these principles is measured through the application of eight factors—constraints on government powers; absence of corruption; open government; fundamental rights; order and security; regulatory enforcement; civil justice; and criminal justice—that are further broken down into 44 subfactors.

Botero emphasizes that the data collected does not come from government sources. Instead, it has two primary sources: surveys of 1,000 residents in each country’s three largest cities and questionnaires completed by in-country practitioners and academics with expertise in civil and commercial law, criminal justice, labor law and public health.

In addition to the overall rankings, each subfactor finding for every country is given a numerical value. They are summarized in a circular chart that looks something like the results of national Rorschach tests.

The collection and analysis of data in the Rule of Law Index “has changed in multiple ways,” says Botero. “The validity of the report has grown exponentially. We are going deeper within countries and deeper in topics.”

The WJP’s findings show, for instance, that an overall strong performance by the United States on most of the rule of law factors is undercut by significant weaknesses in a few key areas.

One of those areas is access to and affordability of civil justice services, where a comparatively low ranking for the United States comes as no surprise to William C. Hubbard, a past ABA president who chairs the World Justice Project board of directors.

Inadequate access to and cost prohibitiveness of civil justice services are long-standing problems in the United States. As part of its efforts to address these problems, the ABA has been a leading advocate for increasing federal funds to the Legal Services Corp., which distributes grants to local offices that provide civil legal services to low-income people.

This article appeared in the November 2017 issue of the ABA Journal with the headline "Measuring Justice: Rule of Law Index helps compare strengths and weaknesses of countries’ legal systems."