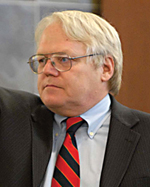 In June 2006, Reno, Nev., judge Chuck Weller was shot in the chest by a disgruntled litigant in a divorce case assigned to him. Earlier that same day, it was discovered, the judge’s assailant had murdered his ex-wife.

But the Washoe County jurist doesn’t want to dwell on the violence that nearly ended his life. Instead, he’s using the experience to help the media understand how to better do their job when reporting on domestic violence situations by writing a guide for reporters. The guide, called Covering Domestic Violence: A Guide for Informed Media Reporting in Nevada (PDF), was published in October in honor of National Domestic Violence Awareness Month.

“People see a murder-suicide and think ‘Who knows what happened there?’ ” Weller says. But studies show that domestic violence stories often are unreported in the media, inaccurately portrayed as isolated incidents or not covered until someone is killed.

Weller’s guide instead urges the media to look beyond the incident to see what really happened through documents like divorce records, temporary restraining orders and police reports.

“Domestic violence is often unknown to friends and neighbors until it becomes murder,” he writes in the guide. “Balance statements that express surprise at the abuser’s conduct with any record of past controlling behavior.”

The booklet also includes domestic violence resources in Nevada, as well as a list of warning signs for potential victims and abusers. While geared toward the Nevada media, Weller says his guide could be used by reporters anywhere.

With better reporting on domestic violence in the media, more victims may come forward, Weller hopes. “It also gives perpetrators an opportunity to go seek some help.”