8th annual Lawyernomics conference will encourage attendees to bet on themselves 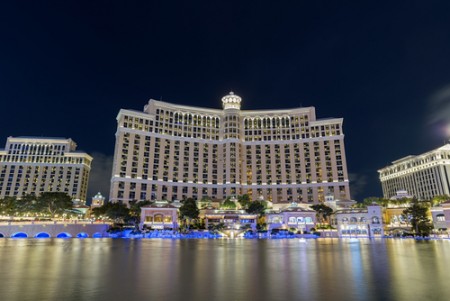 The 8th annual Lawyernomics conference will be held April 20-22 at the Bellagio in Las Vegas. tishomir / Shutterstock.com

Ever since Avvo moved its annual conference to Las Vegas from its Seattle home base, the online legal services marketplace has resisted using gambling-related metaphors as conference themes.

Not this year. The eighth annual Avvo Lawyernomics Conference will focus on “betting on yourself” and taking risks. The conference, which brings together lawyers, legal services providers, marketers and technology professionals to learn more about attorney marketing and business development in the digital age, will be at the Bellagio April 20-22. (The ABA Journal is a media co-sponsor of the event.)

Avvo CEO Mark Britton says the “betting on yourself” idea came to him after he was able to get entrepreneur and investor Tom Breitling to deliver the keynote address. The two men first met and became friends when Travelscape, the company Breitling co-founded, was acquired by Britton’s then-employer, Expedia, in 2000 for about $90 million.

Breitling and his business partner, Tim Poster, then bought the Golden Nugget hotel and casino in Las Vegas for $215 million and upgraded its facilities. The two even created a reality show, The Casino, which ran on Fox in 2004, based from the Golden Nugget, before they sold the casino the following year for $340 million. In 2011, Breitling teamed up with the UFC to create a legal, regulated online gaming site. The site closed in 2014 after it failed to meet projections.

“We’re lucky to have him,” Britton says. “He’s done a lot of interesting stuff in his career and has such a storied past in Las Vegas and in business. He’s a true entrepreneur, a true business person and a true risk-taker.”

Indeed, risk will be a major theme of Breitling’s keynote, which is scheduled for Saturday, April 22. “There’s no profit potential without risk,” Breitling says. “In every deal I do, it’s about assessing risk. I’ve found that, for a lot of lawyers who become entrepreneurs, what they do well is assume, organize and minimize risk.”

Breitling points out that lawyers are well-suited to analyze and assess risk, and that quality can turn them into great well-rounded entrepreneurs. “But you have to have that appetite for risk,” Breitling says. “And you have to recognize that you will fail at some point.”

This year’s conference will feature smaller workshops for lawyers and legal professionals to learn the basics of networking, marketing and social media. There also will be Avvo-centric speeches and presentations to update attendees with the latest product news and legal research. The conference also will feature breakout sessions, as well as an “ignite-style” presentation about the future of law that features Nicole Abboud, founder of Abboud Media; Andrew Arruda, CEO and co-founder of Ross Intelligence; Dan Lear, director of industry relations at Avvo; and Vanessa Vasquez de Lara, owner of Vasquez de Lara Law Group.

Abboud, who started her media company in January after wrapping up her law practice, says she plans to talk about online networking and social media. In her opinion, lawyers shouldn’t think of social media as a place to advertise.

“Social media is really meant to build connections and meet people,” Abboud says. “If you use social media just to push ads and brag about how great you are, it will turn people off.”

Instead, she asserts that social media is meant to connect with people and build relationships with them. “In the process, people will get to know you and your firm and what you specialize in and how you can help them,” Abboud says.

Meanwhile, Britton says he will use his opening address to preview several other important issues, including the need to gather and use data more effectively to serve potential clients, as well as the continued evolution of what he calls “demand-driven economies,” in which the consumer drives what happens.

Britton also was in a reflective mood in the days that led up to the conference. With Avvo celebrating its 10th anniversary this year, Britton couldn’t help but think about how things have progressed.

“If you attended the first Lawyernomics conference, most of our attendees were wondering if they even needed a website,” Britton says. “Now, we have attendees who are challenging our speakers because they are so sharp and understand business. I feel like we had a hand in it, and that’s how we will succeed as an industry.”