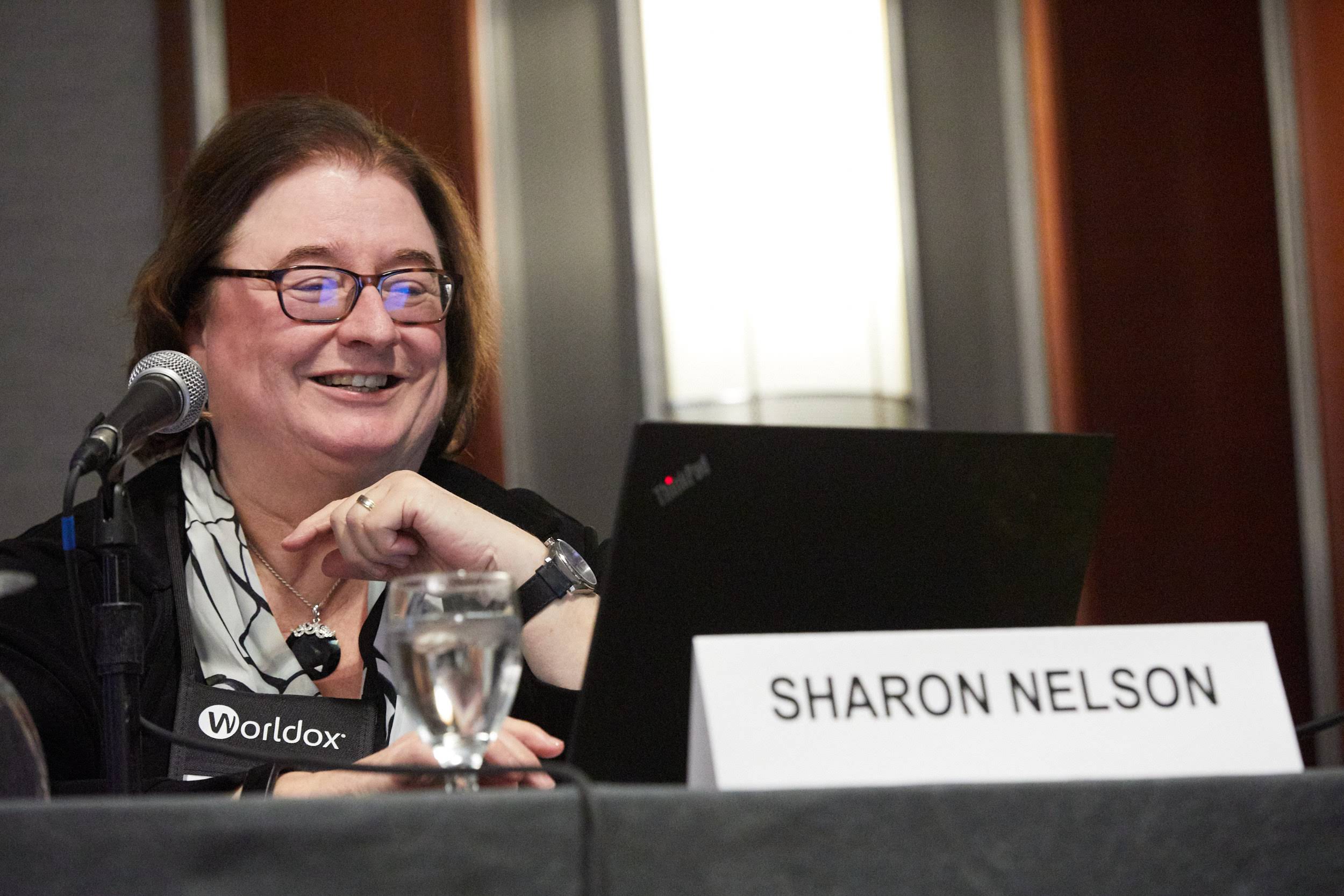 According to Sharon Nelson of Sensei Enterprises, “For a long time, we were in denial about the practice of law and the stress it creates.” Photo by Saverio Truglia.

Sidley Austin should have seen the signals that something was not right with 42-year-old partner Gabe MacConaill, who died by suicide in 2018, Sharon Nelson argued during a Friday panel at ABA Techshow called “The Intersection of Ethics and Well-Being.”

MacConaill had stopped responding to emails and serving his clients, actions that should have raised concerns, said Nelson, the president of technology and cybersecurity firm Sensei Enterprises, Inc. in Fairfax, Virginia. After MacConaill died, a firm spokesperson said the partner should have come forward with his struggles, Nelson added.

Sidley Austin did not respond to a request for comment Friday.

“This guy couldn’t raise his hand,” Nelson said. “There are a lot of people in that position who don’t feel safe asking for help. This is something that we think needs to change.”

Jennifer Gerstenzang, a deputy public defender in the San Diego County Public Defender’s Office who joined Nelson on the panel, pointed out that 74% of legal professionals believe their mental well-being is worse because of their chosen career.

She cited ALM’s recent Mental Health and Substance Abuse Survey, which also found that 33% of respondents increased drug or alcohol use as a result of their work, and about 44% admitted to dealing with stress with alcohol. Nearly 18% also said they have contemplated suicide, a figure that is nearly two times the lifetime rate the general population considers suicide.

Gerstenzang said even though attorneys are increasingly reporting their struggles, they are still not seeking help. The ALM study showed only about 7% sought treatment, and of those, only about 22% went through a program designed for legal professionals.

“The concern is confidentiality,” she said. “The reason they’re not seeking help for this is because they are worried that seeking help is going to out them in some way and have a negative effect on their career.”

Gerstenzang said there are several factors contributing to issues with attorneys’ mental well-being, including the feeling of always being on call and unable to disconnect. She said that while technology helps attorneys with efficiency, it also makes it difficult for them to take the time they need to recharge.

“In a technology conference, sometimes you have to teach people how not to use technology and how to carve some time for their own well-being,” she said.

Nelson highlighted the ABA’s guidance on attorney wellness, including Resolution 105, which was adopted at the 2018 midyear meeting to support the goal of reducing mental health and substance use disorders and improving the well-being of lawyers, judges and law students.

She also commended the creation of the ABA Working Group to Advance Well-Being in the Legal Profession in 2017 and a pledge signed by legal employers to recognize that substance use and mental health problems are a significant challenge and acknowledge that more should be done to support lawyers.

“I’m glad to see there are so many steps that law firms are taking to try to nurture wellness,” Nelson said. “For a long time, we were in denial about the practice of law and the stress it creates.”

Gerstenzang agreed, saying it’s unrealistic to think legal professionals will recognize and report their own struggles with mental health.

“I think the onus is on us as community to identify that something is going on and to reach out to the person,” she said. “That’s how the person is going to get the help they need.”

Nelson said impaired lawyers may commit ethical violations that run afoul of several of the Model Rules of Professional Conduct, including Rule 1.3, on diligence; and Rule 1.4, on communications; and Rule 1.6, on confidentiality of information. She added that part of Rule 1.16 prohibits a lawyer from representing or continuing to represent a client where “the lawyer’s physical or mental condition materially impairs the lawyer’s ability to represent the client.”

Gerstenzang suggested attorneys who have concerns about their colleagues—but don’t want to get them into trouble—can make an anonymous call to their state’s lawyer assistance program.

“If you are worried about hurting someone’s career, know they are hurting their own career, and you saying something can help them,” she said.