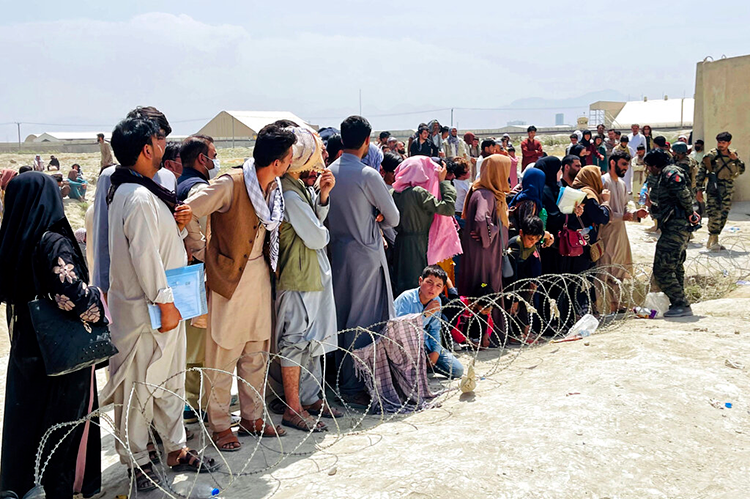 Afghans gather at the international airport in Kabul on Tuesday morning, hoping to escape the country. (AP photo)

ABA President Reginald Turner said Monday the association is “deeply saddened and concerned about the demise of the rule of law in Afghanistan” after the Taliban seized control of the country’s government and society.

“We call on the United States and the rest of the international community to ensure the safety of the many people within Afghanistan who have worked tirelessly over the past 20 years to establish democracy and respect for the rule of law and human rights, including the judges, lawyers and law students who share our profession,” Turner said in his first statement since becoming president of the association after last week’s ABA Hybrid Annual Meeting.

The United States ousted the Taliban, a militant group that controlled Afghanistan in the late 1990s, from power during its invasion of the country in 2001. According to the Associated Press, the Taliban captured all major cities in recent days as U.S. troops prepared to fully withdraw from the country by the end of the month.

President Ashraf Ghani fled Afghanistan and its security forces reportedly surrendered some of its provinces after brief battles or without a fight.

“The ABA and all those committed to the rule of law condemn recent events that threaten the lives and liberty of millions of [Afghans],” Turner said.

Thousands of people flooded the main airport in Kabul Monday, also attempting to flee the country and the possibility of living under the Taliban’s harsh interpretation of Islamic law. The Associated Press reports that women were prohibited from attending school or working when the Taliban previously controlled Afghanistan. The militant group also banned music and stoned those accused of adultery.

According to U.S. officials, several people died Monday after trying to hold on to a military jet as it took off. Others were killed as troops tried to disperse the crowds.