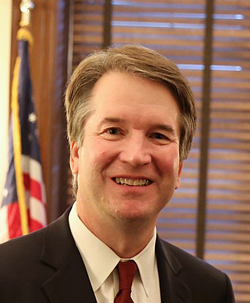 Brett Kavanaugh has informed Harvard Law School that he won’t teach his class on the Supreme Court in January.

Students were informed of the U.S. Supreme Court nominee’s decision in an email late Monday, report the Harvard Crimson, the Washington Post and the National Law Journal. The Crimson was first to report the news.

Kavanaugh’s course was called “The Supreme Court Since 2005.” The National Law Journal says it was a two-week class, while the Crimson describes it as a three-week course.

“Today, Judge Kavanaugh indicated that he can no longer commit to teaching his course in January Term 2019, so the course will not be offered,” wrote Catherine Claypoole, associate dean and dean for academic and faculty affairs, in an email to students.

Kavanaugh withdrew from teaching after objections from students and alumni who sought an investigation into sexual assault claims against the judge. The National Law Journal also points out that the Supreme Court was scheduled to hear arguments in January at the same time as the scheduled class.

Nearly 400 law students walked out of class last week to protest the confirmation process, and law students in six of seven first-year sections have written letters to the law school dean that seek an investigation.

More than 800 alumni have signed a letter calling for the school to rescind Kavanaugh’s lectureship, though it had not been sent to the law dean as of Monday evening.

Four Harvard law students wrote a Sept. 21 op-ed calling for the judge’s removal as an instructor pending a “full and fair investigation” of sexual assault claims against him.

Harvard Law School Dean John Manning sent students a message on Friday that said the battle over Kavanaugh’s confirmation has brought into sharp focus “questions about sexual assault, fair process, fitness and character for high office, the integrity of the political process, and more.” The Washington Post obtained the message from a Harvard law spokeswoman.