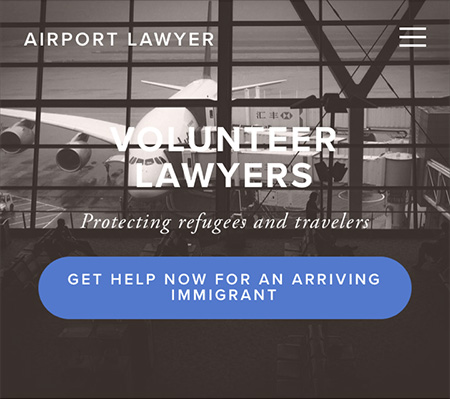 A website created over the weekend by volunteer lawyers and software developers can connect travelers affected by President Donald Trump’s travel ban with free lawyers who can help them.

Airport Lawyer allows users to input information about people targeted by the ban who are traveling to the United States—whether it’s the user, a friend or family member. The information can be shared with lawyers who can be available at the airport to monitor arrivals. The Washington Post and the Seattle Times have stories; a press release is here.

President Trump’s executive order temporarily barred refugees and immigrants from seven Muslim-majority countries from entering the United States. A federal judge issued a temporary restraining order blocking the ban; a federal appeals court heard oral arguments Tuesday on whether to keep the TRO in place. Though Trump’s order was stayed, some travelers have been detained for long periods of time at U.S. airports.

“Two of the scariest things for people waiting at the airport are not knowing what’s going on with their loved ones, and if something is going on, not knowing what to do about it,” said one of the lawyers who worked on the website, Takao Yamada, in an interview with the Washington Post. “We can help them find out and get them some help.”

Project lead Greg McLawsen, a Seattle-area immigration lawyer, told the Washington Post how the website got started. McLawsen said he got a message from a colleague at legal data-management company Clio about how the company could help. Clio has previously donated access to its legal software to volunteer lawyers, and it was receiving inquires about a secure intake form to organize points of contact with volunteer groups.

McLawsen contacted other Seattle-area lawyers, including Yamada, a co-founder of tech startup ReUp who has been volunteering at the Seattle-Tacoma International Airport. The lawyers also worked with legal software company Neota Logic, which donated technology for the website.

A list of the airports where volunteer lawyers are available through the app is here.