Akerman lawyer is appointed as receiver in condo collapse; who may be liable? 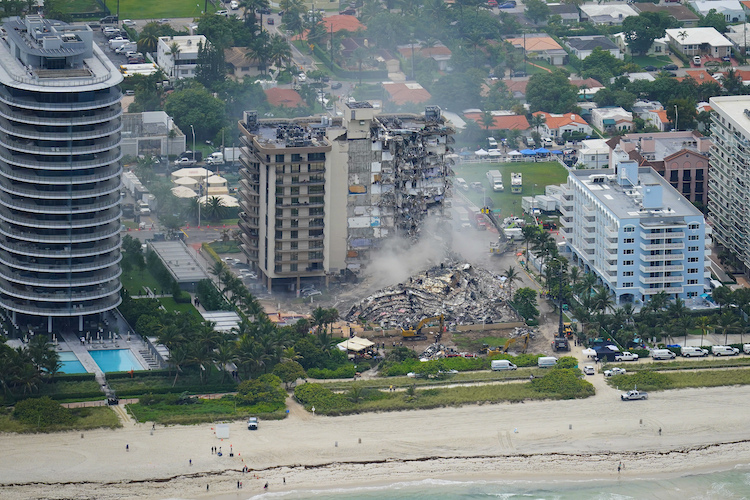 Rescue personnel work in the rubble at the Champlain Towers South condo association in Surfside, Florida, on June 25. The process of seeking answers about why it happened and who is to blame is underway in Florida’s legal system. Photo by Gerald Herbert/The Associated Press.

A Florida judge on Friday appointed an Akerman partner as a receiver to handle financial matters for the Champlain Towers South condo association in litigation over the building collapse in Surfside, Florida.

Hanzman appointed Akerman partner Michael Goldberg as the receiver, calling him “the most preeminent, experienced receiver in this community, if not throughout the country.”

Hanzman is handling consolidated lawsuits related to the collapse. Five lawsuits have been filed and more are likely, according to reports on Friday’s hearing.

Hanzman said it appears that the building has $48 million in insurance coverage, and two insurers have already agreed to pay their maximum liability, for a total $3 million. The condo property is also an asset that is valued at $30 million to $50 million, the judge said.

Hanzman authorized payments of up to $10,000 to condo owners who require housing assistance and allowed payments of $2,000 for families who have to pay for funerals. The money will be an advance on the total recovery.

Reuters considers potential liability in a separate story. The condo association is already a defendant in lawsuits that blamed delayed maintenance on the June 24 building collapse. Also named as a defendant in one lawsuit is the engineering company that conducted inspections in 2018 and 2020, as well as an architectural company, according to Reuters and the Miami Herald.

The engineering company, Morabito Consultants, is accused of failing to warn the association of the need to evacuate and failing to warn residents that recommended repairs had not been carried out. The architectural company, SD Architects, was hired as part of a recertification process. The suit was filed by the family of Harold Rosenberg.

The town of Surfside, Florida, is also a planned defendant, according to the Rosenberg lawsuit.

The defendants “ignored obvious and shocking warning signs and indications that a catastrophe was imminent,” the suit says.

“Whether it be architects, engineers or contractors that had any involvement in this building, we’ll be looking at everybody to hold each party responsible for their negligence,” Wagner said.

He did not tell Reuters whether he represented anyone in the collapse.