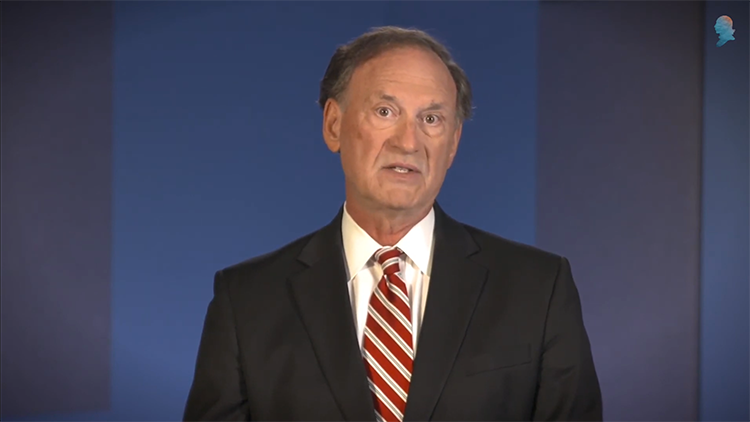 In a Federalist Society speech on Thursday, Justice Samuel A. Alito Jr. said COVID-19 restrictions on public gatherings and worship services highlight a disturbing trend of "lawmaking by executive fiat."

Law.com describes Alito’s remarks as “foreboding and caustic” and said they were “widely viewed as some of his most partisan.” According to the Washington Post, “Alito’s blunt words are likely to reignite questions about how far Supreme Court justices should go in speeches.”

Other publications covering the speech, delivered virtually, include Politico and Law360. How Appealing links to the recorded speech (Alito’s remarks begin at 15:40), while the Volokh Conspiracy provided a transcript.

Alito noted that the topic of this year’s Federalist Society convention is how COVID-19 has affected the legal order. Alito said he wasn’t giving an opinion on any legal issues regarding coronavirus, and he wasn’t criticizing officials for their decisions. Nor is he diminishing the severity of the virus threat to public health, he said. But he nonetheless found fault with the effects of the decisions.

“The pandemic has resulted in previously unimaginable restrictions on individual liberty,” Alito said. “The COVID crisis has served as a sort of constitutional stress test and in doing so it has highlighted disturbing trends that were already in evidence before the pandemic struck.”

One of the disturbing trends, he said, is “the dominance of lawmaking by executive fiat rather than legislation.” As an example, he cited broad delegations of authority given to administrative agencies to “churn out huge volumes of regulations.”

Alito discussed the U.S. Supreme Court’s rejection of an emergency request to block a 50-person limit on attendance at worship services in Nevada. Alito had dissented in the case, pointing out that casinos were allowed to operate at 50% capacity, but churches were not.

In his speech, Alito said it shouldn’t have been a tough call to find Nevada churches were subject to disparate treatment. “Take a quick look at the Constitution,” he said. “You will see the free exercise clause of the First Amendment, which protects religious liberty. You will not find a craps clause or a blackjack clause or a slot machine clause.”

Alito said Nevada law gives broad discretion to the governor in emergencies, and such laws can be abused. “And whatever one may think about the COVID restrictions, we surely don’t want them to become a recurring feature after the pandemic has passed,” he said. “All sorts of things can be called an emergency or disaster of major proportions. Simply slapping on that label cannot provide the ground for abrogating our most fundamental rights.”

The COVID-19 pandemic has also highlighted trends involving individual rights, he said. “This is especially evident with respect to religious liberty. It pains me to say this, but in certain quarters, religious liberty is fast becoming a disfavored right.”

Alito referred to the Masterpiece Cakeshop case, in which the Supreme Court ruled a Colorado commission violated the free exercise rights of a Christian baker by showing hostility to his explained religious reasons for refusing to bake a cake for a gay wedding. Alito criticized a commission member who told the baker that freedom of religion had been used to justify all kinds of discrimination, whether it be slavery or the Holocaust.

Rather than seeing religious liberty as a cherished freedom, Alito said, many see it as “just an excuse for bigotry” that can’t be tolerated, even when no one has been harmed. “The question we face is whether our society will be inclusive enough to tolerate people with unpopular religious beliefs,” he said.

The issue of COVID-19 and religious rights is back before the Supreme Court, Law360 points out. On Thursday, the Roman Catholic Diocese of Brooklyn asked the U.S. Supreme Court to block New York Gov. Andrew Cuomo’s limits on attendance at church services.

In other remarks, Alito condemned a draft ethics opinion that would have prevented judges from being members of the Federalist Society and criticized an amicus brief by five Democratic senators in a Second Amendment case. The brief had argued the National Rifle Association and other dark money groups engineered the case before the court and engineered the current Republican-appointed majority to the court.

Alito said the senators “wrote that the Supreme Court is a sick institution, and that if the court did not mend its ways, well, it might have to be quote, restructured.”

Alito called the brief “an affront to the Constitution and the rule of law” and said it “may provide a foretaste of what the Supreme Court will face in the future.”