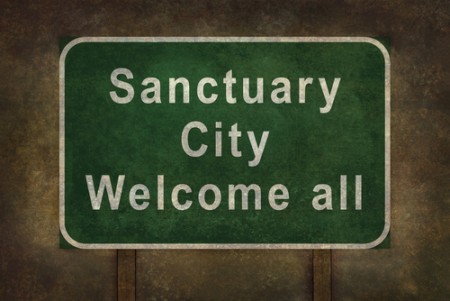 A federal judge in New York City has ruled that the Trump administration did not have the authority to withhold public safety grants from sanctuary jurisdictions that refuse to cooperate in immigration enforcement.

“Consistent with every other court that has considered these issues,” Ramos wrote, “the court concludes that defendants did not have lawful authority to impose these conditions.”

Ramos said the unlawful conditions violate the separation of powers and are arbitrary and capricious in violation of the Administrative Procedure Act.

The DOJ imposed conditions last year on the grants, known as Edward Byrne Memorial Justice Assistance Grants, or Byrne JAG grants. They require grantees to allow access to prisons by immigration agents; provide advance notice when prisoners wanted on an immigration detainer are being released; and certify compliance with a federal law that says states and localities can’t bar officials from communicating with the immigration authorities about citizenship status.

The federal law that says officials must be allowed to communicate about citizenship status is Section 1373 of the Aliens and Nationality Act. Ramos ruled that Section 1373 violates the anti-commandeering doctrine of the 10th Amendment.

Ramos’ opinion lists these prior rulings on restrictions imposed on the public safety grants:

• In a case filed by the city of Evanston and the U.S. Conference of Mayors, a federal judge in Chicago issued a preliminary injunction against all three conditions that applied to the plaintiffs.

• A federal judge in Philadelphia permanently enjoined all three conditions. The case is on appeal.

• A federal judge in California permanently enjoined all three conditions but stayed the injunction’s nationwide scope.

A new lawsuit filed by the city of Chicago says the DOJ has not released millions of dollars in Byrne JAG grants for fiscal year 2018 because of its sanctuary cities policy, despite the injunction applying to last year’s grants.

There is a separate line of litigation involving President Donald Trump’s initial order, which said all federal grants to sanctuary cities would be withheld. Then-Attorney General Jeff Sessions later interpreted Trump’s order narrowly to apply only to federal grants administered by the DOJ and the Department of Homeland Security.

The 9th U.S. Circuit Court of Appeals at San Francisco ruled in August that Trump’s broad order to withhold all federal grants violates separation of powers principles that gave spending power to Congress.

Hat tip to Courthouse News Service, NBC News and the Hill, which covered Ramos’ ruling. A press release by the New York attorney general is here.

Trump plans to nominate a woman to replace Ginsburg on Friday or Saturday; who are the top contenders?