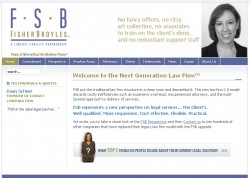 A virtual law firm that got its start in Atlanta, FSB FisherBroyles, appears to have a business model similar to Virtual Law Partners.

Both firms both hire seasoned lawyers and allow them to work at home, the Charlotte Business Journal reports. FSB FisherBroyles allows partners to keep 85 percent of their billings—the same figure cited in prior articles about Virtual Law Partners. The lawyers can earn more money, even while working less and billing at lower rates, the story says.

The Charlotte Business Journal spoke to Gideon Moore, who started his career at Cadwalader, Wickersham & Taft. He moved to increasingly smaller firms, but “he never found the right fit,” the story says. Now he “feels very much at home—literally” at FSB FisherBroyles since he spends some work time at home and some time at his own office, the story says.

Moore told the Charlotte Business Journal he has more time to spend with clients now because he works fewer hours. “I had to bill 160 hours per month, and now 80 hours per month is great, and that’s generally what I’m doing,” he said.