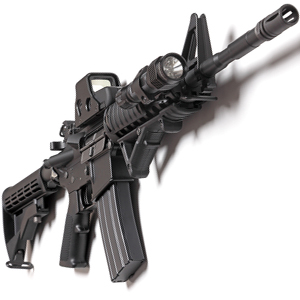 Openly carrying a loaded assault rifle is legal in Georgia.

So, although the authorities had some questions for Jim Cooley when he went to an Atlanta airport recently with a AR-15 semi-automatic assault rifle and a 100-round ammunition drum, they conceded he was doing nothing wrong under state law, reports the Chicago Tribune (reg. req.).

“Because it was a long gun and carried in such a manner, there was a concern for the safety of patrons within the airport,” explains a police report about the incident at Hartsfield-Jackson Atlanta International Airport. However, “by current Georgia law, it was not illegal to carry a weapon inside the airport.”

Cooley, 51, who is a former member of the Illinois National Guard, says he is not concerned about the impact of his conduct on others, even though it is clear from the YouTube video he posted from the incident that a number of airport patrons were alarmed at the sight of the rifle.

“I carry a firearm for the safety of myself and my family. It shouldn’t matter the size of firearm that you are carrying,” Cooley told the Tribune on Thursday. “I’m not scaring anybody. If people are getting scared, that is their own fault.”