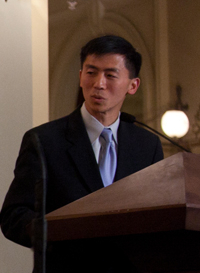 California Supreme Court Justice Goodwin Liu is one of the authors of the study. Office of the Governor of California

Asian-American enrollment in law school has declined more steeply than that of other racial and ethnic groups, according to a report documenting a glass ceiling for this group in the law.

In 2016, the Asian-American share of first-year enrollment was 6.1 percent, the lowest since 1997. Overall, Asian-Americans make up nearly 7 percent of law school enrollment, while they make up 5.6 percent of the U.S. population.

The report (PDF), “A Portrait of Asian Americans in the Law,” suggests the decline could be because of instability in the market for legal employment, the relative attractiveness of other professions, and recruiting efforts by law schools seeking African-American and Hispanic students.

The report’s major conclusion—that Asian-Americans are underrepresented among the top ranks of the legal profession—was released in January. Findings include: Asian-Americans are the largest minority group at major law firms, but they have the highest attrition rates and the lowest ratio of partners to associates. Asian-Americans make up only 3 percent of the federal judiciary and only 2 percent of state court judges.

Asian-Americans comprised 10.3 percent of graduates from top 30 law schools in 2015, but only 6.5 percent of federal judicial clerks. Having several law school mentors, however, boosted the likelihood of a clerkship.

The study included a survey of more than 600 Asian-American lawyers. Survey respondents said their top reasons for attending law school were to develop a satisfying career, to challenge themselves intellectually, and to help individuals. Only 11 percent said one of their top three reasons for going to law school was to become influential, and only 4.7 percent said a top three reason was to enter government or politics.

California Supreme Court Justice Goodwin Liu discussed the findings with the Washington Post. He is among the authors of the study, which is co-authored by three recent graduates of Yale Law School and a Yale law postgraduate associate.

“Asian-American growth in the legal profession has been impressive but penetration into leadership ranks has been slow,” he said.

“Asian-Americans do well when it comes to competition and selection with objective metrics” such as LSAT scores and grades, Liu told the Post. “But when the selection begins to involve things that are intangible for promotions, they kind of flip off the radar.”

Third paragraph updated at 4:40 p.m. to state that Asian-Americans make up 5.6 percent of the U.S. population.