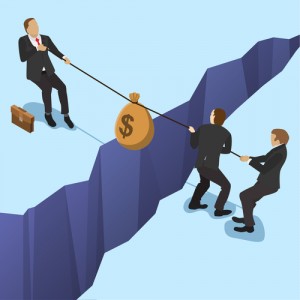 Five former Nixon Peabody partners allege that their former law firm tried to punish them for jumping to DLA Piper by trying to claw back bonuses and withholding money in support of the effort.

Their mediation petition, filed Tuesday in New York state court, claims that Nixon Peabody’s bonus clawback provision restricts partners from practicing law where they choose. As a result, the provision is unenforceable under New York law, the petition says.

Nixon Peabody’s compensation plan states that departing partners who receive bonuses of $100,000 or more are required to repay any portion of the award paid during the fiscal year in which they leave.

Nixon Peabody demanded return of the bonuses. In support of its campaign to claw back the bonuses, Nixon Peabody withheld earned wages, equity distributions and capital from the lawyers in an amount exceeding several million dollars, the petition says.

“The upshot is that Nixon has retained and distributed to its partners the fruit of petitioners’ efforts from Feb. 1, 2019 through July 2019, withheld wages and equity distributions due to petitioners for that same period, and converted to its own use funds in petitioners’ capital accounts,” the petition says. “Yet Nixon still wants petitioners to be ordered to return monies paid to them on account of work performed, fees collected and profits distributed by Nixon to its partners for 2018.”

An attempt at mediation broke down in a dispute over whether the process should be fully remote. Nixon Peabody then sought arbitration. The petition seeks an order compelling mediation.

Nixon Peabody said the claims are without merit in a statement to Thomson Reuters Legal, Law360 and Law.com.

“We are simply seeking to enforce a partnership contractual provision. The repayment obligation is fully compliant with New York law,” the statement said.