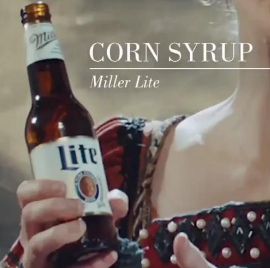 Images from the MillerCoors v. Anheuser-Busch May 24 opinion.

A federal judge in Madison, Wisconsin, is barring Anheuser-Busch, the maker of Bud Light, from running advertisements that fail to give context to its ad claims about rival MillerCoors’ Miller Lite and Coors Light using corn syrup in brewing its beers.

U.S. District Judge William Conley partly granted a preliminary injunction sought by MillerCoors in its false advertising suit over commercials proclaiming that Bud Light does not use corn syrup. The Associated Press and the Wall Street Journal have stories; a MillerCoors press release and the May 24 opinion are here and here.

Anheuser-Busch had launched its corn syrup campaign with a Super Bowl ad in which the Bud Light King rejects a delivery of corn syrup because it is not used in making its beer.

MillerCoors’ suit, filed in March, stressed that corn syrup is used as a fermentation aid, and it is broken down and consumed by yeast. There is no corn syrup in the finished product, nor is there any high-fructose corn syrup used at any stage of the brewing process, the suit said.

Bud Light uses rice in place of corn syrup, although some other Anheuser-Busch products use corn syrup for fermentation.

Conley said Anheuser-Busch can’t make statements about corn syrup in its advertising without the words brewed with, made with or uses. The ads cannot say corn syrup is an ingredient that’s “in” the finished product. Nor can the company run ads saying that Bud Light contains “100% less corn syrup.”

The injunction applies to commercials, print ads and social media.

The ad that ran during the Super Bowl uses the required phrases and is not banned by the injunction.

Conley cited an opinion by the 7th U.S. Circuit Court of Appeals at Chicago that said the federal ban on “misleading” ad claims should not be interpreted to include factual propositions that are susceptible to misunderstanding.

Conley also said the 7th Circuit hasn’t accepted MillerCoors’ theory that an advertiser’s intent can be used to help determine whether an ad is misleading.

MillerCoors had alleged that there was an intent to deceive, illustrated by comments made by Anheuser-Busch officials in trade publications. 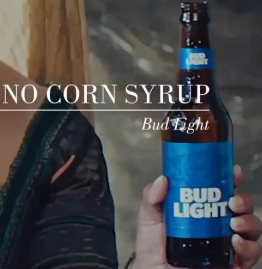 Conley said 7th Circuit guidance would be appreciated if there is an appeal of his ruling.

Absent that guidance, Conley said he was unwilling “to rely on intent as the hook” to ban truthful statements about beers being made with, brewed with or using corn syrup.

“Because all advertising seems to be an effort to exploit consumer likes and dislikes, interests and fears, applying the Lanham Act to neutral, truthful statements intended to exploit or take advantage of consumer beliefs is problematic, especially in light of the arguable value of comparative advertisements in promoting intelligent consumer decision-making,” Conley wrote.