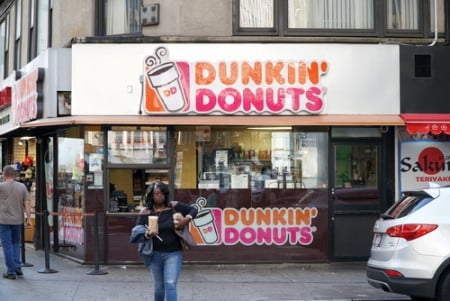 An unhappy Dunkin’ Donuts customer who said he asked for butter and received a butter substitute will receive a $500 incentive award as a result of two class action settlements with 23 franchises in Massachusetts.

The customer, Jan Polanik, had claimed he paid 25 cents for butter on his bagels over a four-year period beginning in June 2012, the New York Times reports. He said he wasn’t told that the shops were actually substituting margarine or a butter substitute.

If the settlement is approved, the franchises will use only butter for a year and will explicitly state on their menus whether a substitute is used after that, according to the Times. And up to 1,400 people can receive up to three, free buttered baked goods at the 23 locations. The Boston Globe had previously reported on the settlement, but lawyers were not disclosing the terms.

Polanik’s lawyer, Thomas G. Shapiro, could collect as much as $90,000 in the settlement, the Boston Globe later reported. Shapiro told the publication that two law firms which worked on the class actions for more than a year would share the money.

“It’s much more time consuming than one would imagine looking from the outside,” Shapiro told the Globe. “When compared with the actual time we put into the case, this is not actually a profitable case for us.”

Dunkin’ Donuts told the Times in a statement that the settlement does not affect its corporate butter policies. Most Dunkin’ Donuts restaurants in Massachusetts carry individual butter packets as well as a butter-substitute spread, the statement said.

Shapiro spoke with the newspapers about why he filed the lawsuit.

“Candidly, it seems like a really minor thing, and we thought twice or three times about whether to bring a lawsuit or not,” he told the Globe. But people who prefer butter don’t want a substitute, he told both newspapers.

“The main thrust of the case, really, is to get the stores, and hopefully Dunkin’ Donuts generally, to change that practice and not deceive people,” he told the Times.