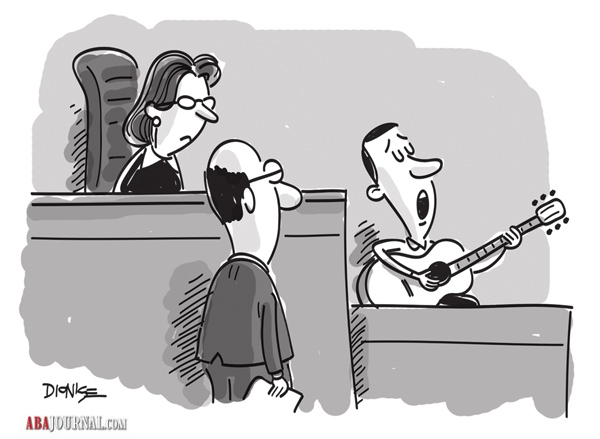 It’s your turn to vote for this month’s cartoon caption that will appear in an upcoming issue of the magazine.

Examining this month’s batch of cartoon-caption entries, it’s fair to say many of them were off key. But ABA Journal staff picked these hits from the mix. Now it’s your turn to vote for the caption that will appear in an upcoming issue of the magazine.

• “Your honor, this is not what I had in mind when I said my client would settle for a song.”—submitted by Dennis Honabach

• “Objection overruled. I want to hear whether he gets his truck and dog back.”—submitted by Mickey Schmitt of Nashville, Tennessee

• Leonard Ziff was not successful in introducing the “open mic” concept to the Friday civil motions docket.—submitted by Karl W. Pilger of Vienna, Virginia