Cartoon poll: Which caption best describes this mediation between a farmer and his cow? 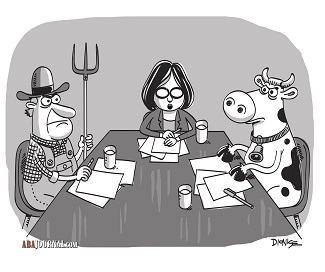 Poll: Vote for the caption best describing this mediation between a farmer and his cow

After narrowing the cartoon contest entry list, these are the three staff picks. Now it’s your turn to vote for the winning caption that will appear in an upcoming issue of the ABA Journal. Read the post and add comments here.

ABA Journal staffers have sifted through more than 150 caption entries addressing this month’s scene, an apparent mediation between a cow and a farmer. Now it’s your turn.

• “She believes you’ve been milking her for all she’s worth.” —submitted by Paul Agathen, Washington, Missouri

• “We agree old MacDonald had a farm and that on his farm he had a cow. What we need to settle is in subparagraphs E.i., E.i. and o.” —submitted by James A. Walker