Poll: What happens when it’s this lawyer’s turn to sit on Santa’s lap? 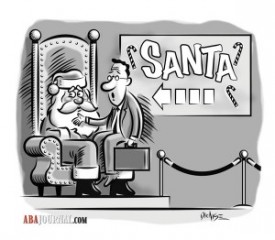 ABA Journal staffers had a holly jolly time choosing favorites from more than 100 cartoon caption entries. Now it’s your turn to pick a favorite. The caption will the most votes will appear in an upcoming issue of the magazine.

• “They’re claiming the coal in their stockings caused them emotional distress.”—submitted by Zachary Phillipps of Stamford, Connecticut

• “Just so you know, Floyd, this is the last consult I give at your ‘office.’ “—submitted by George Huddleston III of Birmingham, Alabama

• “About my roof …” —submitted by Karen DeMeola of Hartford, Connecticut