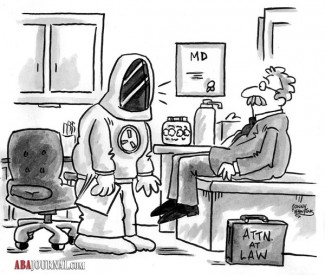 After winnowing down the cartoon contest entry list, these are the three staff picks. Now it’s your turn to vote for the winning caption that will appear in an upcoming issue of the magazine. Read the post and add comments here.

ABA Journal staffers have sifted through a few dozen entries for our September Cartoon Caption Contest featuring the work of artist Jonny Hawkins. Now it’s your turn to pick a favorite.

• “You should be grateful. Most of my colleagues wouldn’t touch a lawyer with a 10 foot pole.”—submitted by James H. Schnare II, North Palm Beach, Florida

• “I was told this case is toxic.”—submitted by James Michael Cole, Fresno, California

• “I apologize for my attire; my malpractice carrier heard you were coming today.” —submitted by Maximillian M. Schwarz, Garden City, New York