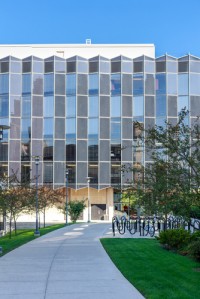 The University of Chicago Law School. Photo from Shutterstock.com.

A Chicago man was charged Tuesday with breaking into the apartment of two University of Chicago Law School students, kidnapping them and physically assaulting them.

The alleged crime happened Aug. 31, and the students, ages 22 and 25, had recently arrived in the city, the Chicago Sun-Times reports. Johnathan Drummond, the defendant, is being held without bail.

Drummond, 29, allegedly broke in to the two women’s apartment through a window while they were asleep and demanded money. He’s also accused of threatening the women with what they thought was a gun, stealing their jewelry and ordering them to leave their apartment with him to get into a car and go to an ATM.

Additionally, he’s charged with sexually assaulting one of the women in the car.

After failing to get cash from an ATM, Drummond allegedly took the women to a Walgreens, hoping to get a money transfer. The money transfer service was closed, and Drummond reportedly fled while the women got help in the drugstore parking lot, the Chicago Tribune reports.

Drummond said after his arrest he picked up two drunken women from the side of the road, and that’s why he was with them at the ATM. But prosecutors claim that surveillance video shows him with the two women, and neither appeared to be intoxicated, according to the Chicago Tribune.

He was arrested with stolen jewelry in his possession, which he claimed belonged to a friend. Drummond allegedly told his girlfriend that he took her car, kidnapped the two women and stole their jewelry, according to the Chicago Sun-Times.