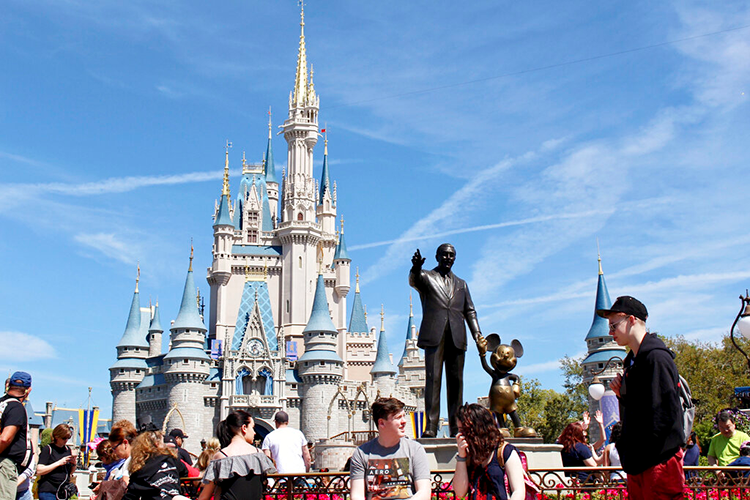 In this 2018 file photo, guests mill around in front of Magic Kingdom Park at Walt Disney World Resort in Orlando, Florida. (Kyodo via AP Images)

The chief deputy district attorney in Clark County, Nevada, has been labeled a “Disney Karen” after he wrote a newspaper commentary criticizing Disney World for political correctness.

In a guest column for the Orlando Sentinel, Jonathan VanBoskerck said he loved Disney World, but he is strongly rethinking his commitment to the amusement park because of wokeness. The New York Times and the Las Vegas Review-Journal have coverage.

VanBoskerck was responding to changes made at Disney parks to be more inclusive. One change is a reimagining of Splash Mountain to eliminate references to Song of the South, a film that was panned by the NAACP for perpetuating a glorified picture of slavery. The new theme is based on The Princess and the Frog.

In another change, Disney removed a scene from its Pirates of the Caribbean ride that depicts women being sold by pirates at auction. Disney also removed Trader Sam, who sells shrunken heads, from its Jungle Cruise ride.

Disney World is also giving park employees more flexibility to reflect their cultures and individuality while working, including imposing fewer restrictions on haircuts and tattoos.

“The next time I ride Jungle Cruise I will not be thinking about the gloriously entertaining puns of the skippers,” VanBoskerck wrote. “I will be thinking about Disney’s political agenda. That’s a mood killer.”

“The parks are less fun because immersion and thus the joy is taking a back seat to politics,” he said. “Immersion should not be sacrificed on the altar of political correctness and appeasing the Twitter mob.”

Above the Law posted some tweets criticizing VanBoskerck’s column and praising Disney.

“I have the privilege of having Disney World in my district along with other world-class attractions,” wrote Democratic U.S. Rep. Val Demings of Florida. “I am proud to represent a community that is welcoming, tolerant and always evolving to offer the best possible experience.”