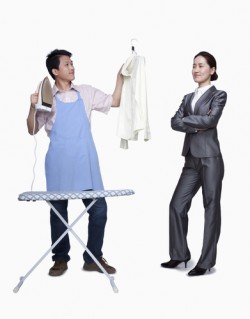 What’s all the fuss about househusbands?

The number of women in finance with stay-at-home spouses has increased almost tenfold since 1980, the New York Times reported on Sunday. But the arrangement isn’t really new, according to the American Lawyer’s Careerist blogger, who also wrote an article in Time.

“I’ve been covering the elite echelons of big law firms for over 10 years, and I can tell you that many of the women who make it to the top of the heap often have a man at home who’s shepherding the kids around town, planning the meals, and otherwise keeping the hearth fired up,” the Careerist writes for Time.

The real news, according to the Careerist, is that until recently, female partners were reluctant to admit they had a househusband. A common explanation was that the husband “works on the side” or is “doing consulting.”

“All of this points to our entrenched ambivalence about changing gender roles,” the Careerist writes in TIme. “Men in these situations often feel alienated, particularly if they are surrounded by stay-at-home moms. But the power moms with the stay-at-home husbands are just as uneasy, often more embarrassed than proud that they’ve upset the traditional order. We simply haven’t evolved to the point where a househusband is considered desirable, much less normal.”