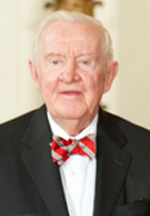 He spoke at a senate hearing for campaign finance laws, the Associated Press reports, and urged the body to change existing law. The article notes that Stevens has criticized prior U.S. Supreme Court rulings that led to unlimited campaign donations and super PACs.

“While money is used to finance speech, money is not speech. Speech is only one of the activities that are financed by campaign contributions and expenditures,” Stevens told the Senate Rules Committee. “Those financial activities should not receive precisely the same constitutional protections as speech itself. After all, campaign funds were used to finance the Watergate burglary, actions that clearly were not protected by the First Amendment.”

In his remarks (PDF), Stevens compared litigation and campaigns.

“Like rules that govern athletic contests or adversary litigation, those rules should create a level playing field,” he testified. “The interest in creating a level playing field justifies regulation of campaign speech that does not apply to speech about general issues that is not designed to affect the outcome of elections.”

C-SPAN has a video of the hearing, including Stevens’ full testimony.

According to RollCall, Sen. Charles E. Schumer, chairman of the Rules and Administration panel, released a prepared statement saying that the Senate will vote this year on a constitutional amendment that would nullify the Supreme Court’s ruling on the First Amendment regarding campaign contributions.

The hearings come in the wake of McCutcheon vs. FEC, the Supreme Court’s ruling earlier this month which ended aggregate contribution limits for candidates and political parties. There has also been great debate over Citizens United v. FEC, the 2010 ruling which held that corporations had First Amendment rights when engaging in political activities.

“Rules limiting campaign contributions should recognize the distinction between money provided by constituents, and money provided by non-voters, such as corporations and people living in other jurisdictions,” Stevens testified Wednesday.