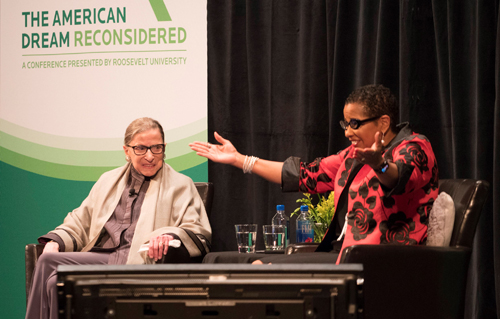 Justice Ruth Bader Ginsburg shared warm memories of her "dear colleague" Antonin Scalia, and called on Congress to end partisanship surrounding Supreme Court nominations in an appearance at a conference on Monday night in Chicago.

Speaking to a packed crowd at the Auditorium Theater on the campus of Roosevelt University, Ginsburg said that the trend of voting along party lines rather than on the merits and qualifications of a potential Supreme Court justice threatened the spirit of judicial independence.

Ginsburg pointed out that though she and Scalia were ideological opposites, he had been confirmed unanimously by the Senate in 1986, and that in 1993, only three senators had opposed her confirmation. She contrasted that with the experience of Chief Justice John G. Roberts Jr. in 2005, when he was opposed by 22 Democratic senators. Ginsburg said that on merits there should have been no opposition to Roberts’ appointment. She also criticized the votes against Justices Sonia Sotomayor (68-31 in 2009) and Elena Kagan (63-37 in 2010), which were mostly along party lines.

“My hope—and I hope I will live to see it in this lifetime—is that our Congress will get over this nonsense,” she said, calling for a return to “the bipartisan spirit that had prevailed in the ’80s and ’90s.”

At several points during the event, Williams displayed slides showing current statistics about the positions and salaries of women in the legal field, which still lag behind those of men. Ginsburg said that although the door of opportunity was now open to women, the ladder to the top was not assured. “I think there has not been a better time to be a woman in the law,” she said, adding, “I’m not saying there’s no discrimination.”

She reflected back about a conversation with retired Justice Sandra Day O’Connor, in which they wondered what their own careers would have looked like without the discrimination and opposition they’d faced. Had more law firms been willing to hire women in the 1950s and 1960s, O’Connor felt that rather than being U.S. Supreme Court justices, “we both would be retired partners at large law firms,” Ginsburg recalled.

“When things look bleak, it may turn out to operate in your favor,” Ginsburg told the audience.

The justice said she is asked frequently whether women can have it all, and that her response is, “You can’t have it all, all at once.” Speaking to the partnership in her own marriage, Ginsburg said that she and her late husband, Marty, had taken turns throughout their marriage, shifting family and work responsibilities based on the goals they were each trying to achieve. “You adjust to each other,” she said, so that while she may not have been wholly focused on both her family and career at the same time, “over the long haul, I’ve had it all.”

At several points during her conversation with Williams, Ginsburg brought up Scalia, “my dear colleague, who I miss very much.” When asked by Williams how Scalia had influenced her judicial opinions, Ginsburg praised his grasp of language and said that if he caught a grammatical error in her writing, he would privately contact her to let her know.

But more importantly, she always appreciated writing a majority opinion against his dissent, she said. His dissents were always “zingers,” and by pointing out the potential soft spots in her own arguments, they helped her fine-tune and strengthen her majority opinions.

When Williams asked how difficult it was to work with other justices who have strong ideological differences, Ginsburg said that it requires respect for the institution of the Supreme Court. “We revere the institution for which we work.”

The court could not function unless you respect your fellow justices, “and even like most of them,” she quipped.

Throughout her life and career, Ginsburg has tried to keep in mind this advice from her mother, Celia Bader: “Don’t succumb to emotions which do you no good.” The top three emotions she feels that applies to are anger, envy and remorse. She says that rather than anger, which is “a useless emotion,” she relies on “sweet reason” to try to persuade her colleagues to do the right thing.

Ginsburg also hopes to persuade everyone in the legal field to use their skills to make life better for people who are not so fortunate, “not just working to turn over a buck.” She urged lawyers to repair tears in their local communities. Americans should make the country safe for all, and let people know that if they’re willing to put in the hard work, “that dreams can come true,” she said.

A noted opera lover, Ginsburg was surprised onstage by a performance by Roosevelt University student and soprano Lani Stait, who sang “Ain’t It a Pretty Night” and was accompanied by music professor Scott Gilmore on the piano. Ginsburg hugged Stait after her performance.

Opera also featured in the response to Williams’ last question to the justice: How long does she plan on remaining on the court?

As an answer, Ginsburg described the last scene of Derrick Wang’s opera Scalia/Ginsburg, written about their legendary friendship and judicial wrangling. In the last moments of the opera, after Scalia’s death, the Ginsburg character remains onstage, singing, “There’s work to be done; I will remain to do it, as long as I can, full steam.”