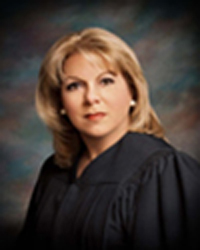 A Texas woman has sued a Dallas judge for alleged defamation and infliction of emotional distress after the judge identified her at a campaign event and said her boyfriend had gone to prison for assaulting her.

Pope-Nixon’s suit says she suffered emotional distress when Howard publicly identified her as a domestic abuse victim. Pope-Nixon called on Howard to resign in a press conference the next day. Howard’s campaign manager responded that Howard was pointing out Nixon to security because she might be dangerous. That statement was false and was motivated by “an effort to perform damage control,” the suit says.

Howard had handled a domestic abuse case against Nixon’s husband in 2014. Nixon had asked Howard to send her husband for mental health treatment, but Howard instead revoked his probation, sending him to prison for two years.

Howard was previously criticized for a 2014 case in which she discussed sentencing an 18-year-old man to 45 days in jail for forcing a 14-year-old girl to have sex with him at school. Howard said the girl had agreed to have sex with him, but not at school, and she “wasn’t the victim she claimed to be.” The girl had prior sexual partners, Howard said. The judge was later given a public warning for the incident.

Law360 reviewed a tape of the campaign event. Howard appears to notice Pope-Nixon and asks if she is Mrs. Nixon. Pope-Nixon replies that it is unprofessional for Howard to address her and brings up Howard’s statement about the rape victim. A moderator repeatedly asks Pope-Nixon to sit down and she eventually does so.

Pope-Nixon told the Morning News that Howard “called my name and proceeded to embarrass me and humiliate me. She bullied this 14-year-old child and now she’s abusing me, a domestic abuse victim.”

Next:
Program places law students in paid internships that help them see the business picture