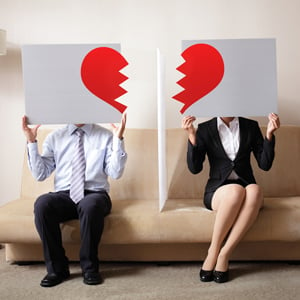 In an unusual ruling, a Kentucky judge has denied the divorce of a couple who had separated after being married for 13 years.

In her Aug. 23 order, Bullitt County Family Court Judge Monica Meredith pointed out that Doug and Nicole Potts worked well together and have continued to do so for the sake of their child. She also noted that she had observed the couple’s emotional responses to each other, saying they “were respectful and courteous” and “held themselves in dignified and mature composure.”

For those reasons, Meredith said she couldn’t yet make a finding that the Potts’ marriage was “irretrievably broken,” as state law requires before entering a decree of dissolution.

“Frankly, the court observes these parties to be two people who have lost the ability to communicate with one another about their emotional relationship and, perhaps, have let their pride become a wall between them,” Meredith wrote.

Meredith asked the couple to instead seek counseling to determine whether the issues that led to the divorce petition could be resolved without ending the marriage. She also asked that neither party introduce their child to “any dating interest,” and if their child had already been introduced to such a person, to stop all contact between them.

“The court notes that these parties give the impression that each is devoted to working through their personal conflict in ways that reduce the negative effects of the situation on the child,” Meredith wrote. “The court respects the effort the parties have demonstrated in that regard and encourages the parties to continue to do so.”

WLKY, a CBS-affiliated television station licensed to Louisville, Kentucky, reported on the case and spoke to the couple’s attorneys after the decision.

Sidney Vieck, Nicole Potts’ attorney, said she was “pretty stunned that a court would order a couple to go back to counseling when they’re behaving so respectfully towards one another.”

She also said “usually, the opposite would be true.”

“From my perspective, the ruling was very unexpected, and my goal in my practice is to have my clients prepared for any situation,” Ripka said. “I can tell you after talking to opposing counsel, neither one of us expected this ruling.”

Doug Potts also told WLKY after Meredith’s ruling that he and his wife have already spent upward of $13,000 in counseling and attorney fees.

“We’ve already been down this road with counseling and it didn’t work,” he told the television station. “So you could say that it’s causing some emotional distress rehashing what broke up the marriage and being ordered to do this all over again, but I’ll do whatever it takes.”

The couple is expected to notify the judge of any progress by the next hearing in October.