A Florida Department of Corrections lawyer who made derogatory comments about black people on Facebook resigned Wednesday.

Eric Giunta, the department’s assistant general counsel since December 2017, wrote that “black people need to stop raping, murdering, stealing, and vandalizing, and quit having children out of wedlock” in reaction to a video about systemic racism posted by Providence College theology professor Holly Taylor Coolman. The Tallahassee Democrat has coverage.

“That’s how literally every other once-despised ethnic group broke the cycle and entered into the middle class mainstream,” wrote Giunta, who was placed under disciplinary review before he resigned.

Coolman told Giunta in a follow-up post that it was hard to respond.

“I’ll just say briefly that I don’t think your comment reflects an understanding of the important differences between the history of the black community and of ‘every other once-despised ethnic group,’ ” she said.

In another post, Giunta said he saw nothing in the video “that even remotely took into account black lifestyle choices and their impact on black poverty. Not a word. As if high crime rates, promiscuous sexuality, out-of-wedlock births, lack of marriage, etc. has no impact whatsoever on social and economic advancement. Nope, it’s all the fault of the white devil!” 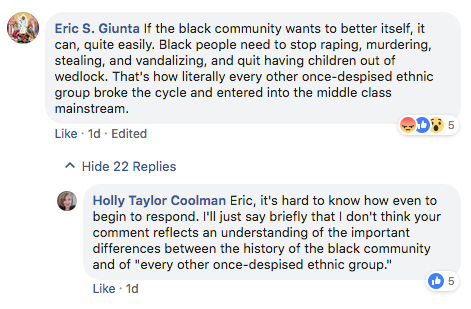 Giunta, a member of the Florida Bar since 2012, has also worked as a senior judicial clerk for the Florida First District Court of Appeal and as an attorney for the Florida Department of Business and Professional Regulation’s Construction Industry Licensing Board, according to his LinkedIn page.

In a response to the Tallahassee Democrat, Giunta said he was offended by the video for blaming the “challenges facing black individuals and communities” to “systemic racism” by white people. He added that he “did not mean to suggest that all or even most black people are criminals, violent or otherwise.”