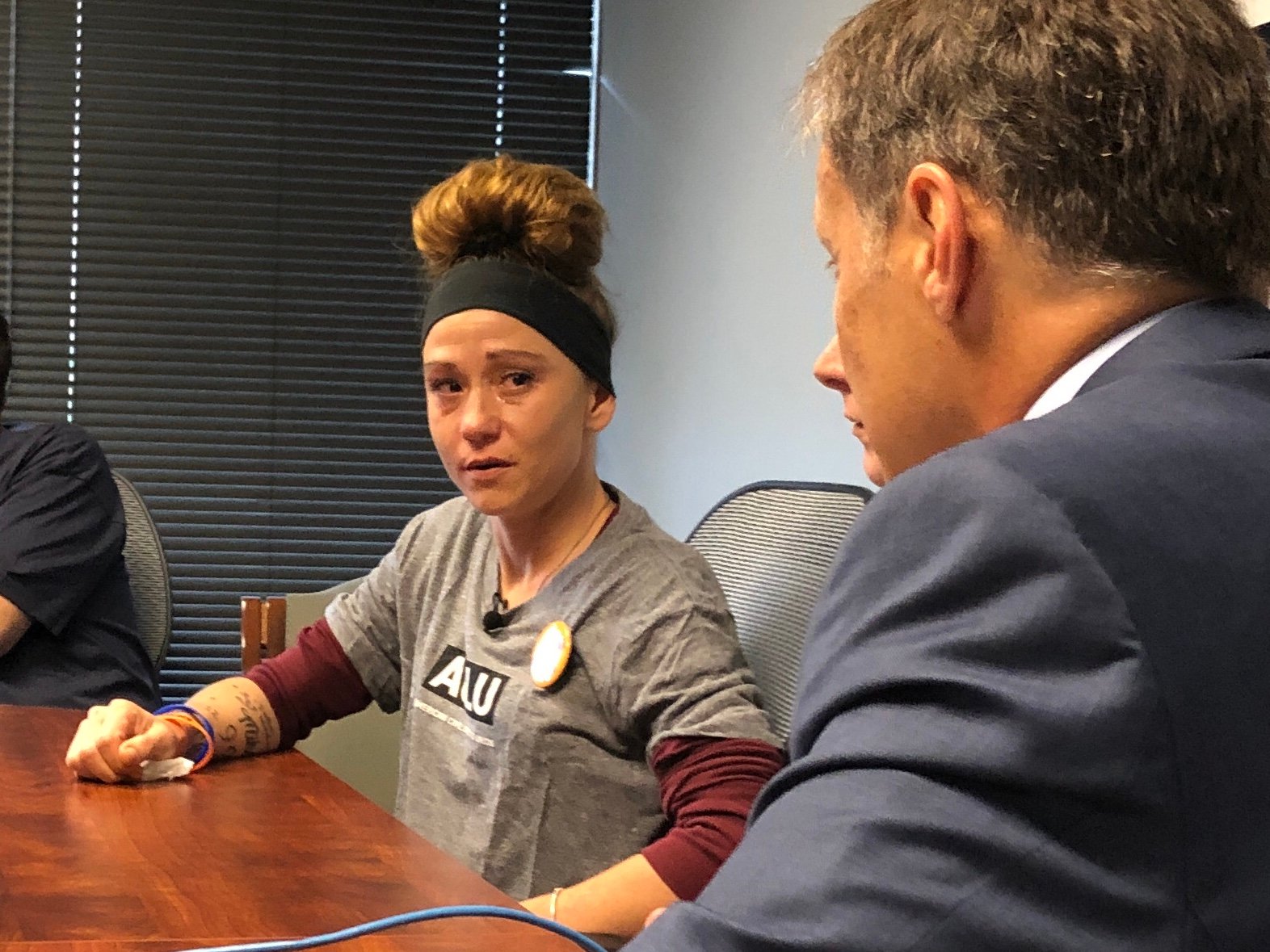 When Melissa Gass, a mother of five in central Pennsylvania, was 10, she was in a car crash, and her head slammed into the windshield. Ever since, she’s suffered seizures, which occur with weekly and sometimes daily frequency and are life-threatening. When one is coming on, she feels a throbbing pain in the back left side of her brain; the next thing she knows, she’s waking up outside with her face on the ground—or in an intensive care unit at a hospital, often having urinated or defecated on herself. Someone, either a medical professional or a family member if she’s at home, has to inject diazepam gel into her rectum to keep her alive.

But medical marijuana has been legal in Pennsylvania since 2016, and Gass, 42, obtained a doctor’s certification for it last February, court records show. She started taking a small amount—a dot of cannabis oil in a spoonful of peanut butter three times a day, or a drop on her gums if she felt an attack coming on—and the seizures all but stopped. She got her life back. She no longer self-medicated with benzodiazepines, sleeping pills and alcohol, which are far more addictive and dangerous, especially when taken together. She was able to be the mom she wanted to be again. And she was ready to go back to work at the nursing home where, before the seizures became too debilitating, she’d long been employed as a caretaker, she says.

Then, in September, her Lebanon County probation officer told her that due to a new court policy there, she had until the end of the month to stop using marijuana or else she might go to jail.

Gass is on probation because back in 2016, she hit her husband of 20 years. According to court records, she does not remember the fight because at the time, she was mixing drugs to ease her symptoms. She was arrested for simple assault. Her husband asked prosecutors not to press charges, to no avail, he says. The couple made up and remain together.

But as part of Gass’ ongoing court supervision, her probation officer informed her, she would now have to get drug-tested for marijuana. That meant no cannabis oil, even though it is legal—and even though, soon after she was forced to stop taking it, she had more than 20 seizures in two weeks, she says.

Following years of research demonstrating that marijuana can be a life-changing treatment for people with cancer, Alzheimer’s, multiple sclerosis, PTSD, eating disorders, nausea and epilepsy, and that it is neither physically addictive nor an evident danger to public safety, the drug has been legalized for medical use in 33 states and for adults over 21 to smoke recreationally in 11. Yet for most people on probation or parole—even in precisely these same states—drug testing remains the rule, and jail time the potential punishment.

The argument that many parole and probation authorities make for this seeming contradiction is that regardless of whether marijuana has been legalized in their state, it remains illegal at the federal level, and that if you’re under government supervision for committing a crime, you should at the very least have to follow all state and federal laws. Some parole and probation officials also point out that they drug-test their own officers, so the people they oversee should be held to at least the same standard.

“I don’t know of any paroling authorities who are casual about marijuana—it’s part of their institutional culture, and old habits are hard to break,” said Edward E. Rhine, a former corrections official in multiple states and an expert on parole at the Robina Institute of Criminal Law and Criminal Justice at the University of Minnesota Law School. “Obviously most people couldn’t conceive of marijuana being allowed inside a prison, even if that prison is in a state where it has been legalized.”

A handful of states where marijuana is now legal, though, have taken action to make it available to people on probation or parole. Arizona’s supreme court ruled in 2015 that medical marijuana patients cannot be arrested or jailed for taking their medication, even if they are under court supervision. An Oregon appeals court in 2018 issued a similar decision.

Within Pennsylvania, where there isn’t yet any such ruling statewide, different counties have different policies. If Melissa Gass lived in Philadelphia or Pittsburgh, for example, she would be allowed to take her cannabis oil.

In other states where there haven’t been major court cases, county courts and even individual probation officers are often responsible for deciding whether to drug-test—and possibly jail—those under their control. Some do so only when marijuana or drugs were related to someone’s underlying crime.

Gass is now the lead plaintiff in a lawsuit by the ACLU of Pennsylvania challenging the court rule in Lebanon County that prohibits parolees and probationers who have a prescription for medical marijuana from using it. (The organization says that at least a half dozen other counties statewide have a similar policy.) Her lawyers are filing a brief with the state supreme court this month, and the case is expected to be argued in the summer.

The ACLU’s position is that these counties’ rules contradict the letter and intent of Pennsylvania’s 2016 medical marijuana law, which protected medical marijuana patients from any criminal sanction. The legislation expressly prohibited people in prison from possessing pot, but did not expressly exclude those on parole or probation. The lawyers also point out that people under court supervision can still use opioids with a prescription—which is far more of a public health concern in this day and age, especially in Pennsylvania.

Lebanon County’s President Judge John C. Tylwalk responded in court papers that the process of following rules assists people with their overall rehabilitation, and that no one will be immediately jailed for failing a drug test without getting a hearing first. The county also said that probation officials had been experiencing difficulty with supervising people on marijuana and with getting them to undertake drug treatment, which is often a key part of supervision.

But until the state supreme court makes a decision, it has put a hold on the policy, and Gass can go back to her treatment regimen.

“I’m not trying to fight the system,” said Gass, who has struggled with self-harm and once attempted suicide. “I just don’t want to die.”

In Colorado, where anyone can smoke a joint freely, a parolee named Mark Paulsen is still being tested for marijuana—even though he is about to die.

In 2009, Paulsen, a former mechanic who is an alcoholic, blacked out while drinking and attacked two acquaintances with a knife (neither was killed). He was sentenced to prison for a decade, records show. There, his hepatitis of the liver worsened, becoming end-stage cirrhosis by the time he was released last year.

Paulsen, 64, is now on parole outside Denver. He is visibly ill, jaundiced and constantly bleeding. He has peach-sized tumors in his abdomen, which he says make walking around feel like jumping up and down with heavy, jagged rocks in his belly. And his nausea is so severe that he has at times gone weeks without eating solid food. “The always-there-ness” of the stomach pain, he said, “is what gets you.”

As he waits to die, there have been all the challenges familiar to people on parole. He got out of prison with no money or health insurance, and has to go to the emergency room instead of to a specialist because he’s in such immediate pain, he says. There, he has racked up insurmountable medical debt.

The only things that would ease his symptoms are opioids or medical marijuana, but the former is something that doctors have been wary to prescribe, amid a nationwide epidemic. The latter, Paulsen believes, would seem the solution. (He also has been sober ever since his crime and is not “drug-seeking,” he emphasizes.)

Yet every morning, he has to call his parole office, he says. If he is randomly selected that day, he must ride the bus an hour and a half, those sharp rocks in his stomach jostling, to take a drug test. And if he fails one, he could be sent back to prison for whatever time he has left before dying.

A spokeswoman for the Colorado Department of Corrections said that if a parolee has a prescription for medical marijuana, the agency in most instances is willing to “work with” that person to avoid being sanctioned for using it. She later added, “Our parole team is going to reach out directly to Mr. Paulsen to see what assistance they can provide.”

“What everyone keeps forgetting,” Paulsen said, “is that I am a patient.”