The stunning discovery in 1990 of a largely complete Tyrannosaurus rex skeleton near an Indian reservation in South Dakota led to an epic legal battle as multiple parties argued over ownership of the 65-million-year-old bones.

The skeleton of the enormous, long-dead dinosaur, known as Sue, was confiscated by the feds from the Black Hills Institute, whose workers found her, and eventually purchased for $8.36 million by the Field Museum in Chicago, as an acclaimed new documentary recounts. Meanwhile, the president of the Institute wound up behind bars for more than a year after the find cast a spotlight on his fossil collection and sales practices, according to the Los Angeles Times (reg. req.) and the Rapid City Journal. 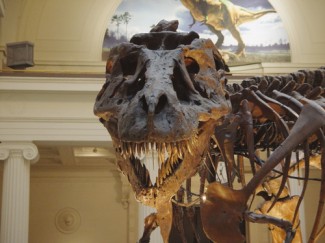 The fossil of Tyrannosaurus rex Sue, at the Field Museum in Chicago. Image from Shutterstock.

“It was the best of times, because we had just found the bones, but then it was the worst of times. I faced the longest criminal trial in South Dakota history, and was sentenced to two years in prison, all because I failed to fill out some forms. It was a scary time,” Peter Larson told the Rapid City Journal in a phone interview as he headed to see Dinosaur 13 last week at the Sundance Film Festival, where it was top-featured on the program. A 1997 opinion by the St. Louis-based 8th U.S. Circuit Court of Appeals affirmed Larson’s conviction.

The movie, whose title refers to the fact that Sue was the 13th T. rex skeleton ever discovered, is expected to premiere this year in theaters. It was reportedly purchased by Lionsgate and CNN Films for about $1 million.

ABAJournal.com: “Picking up stones on beach gets American tourist criminally prosecuted in Turkey”