Does property owner have the right to shoot down hobbyist's hovering drone? 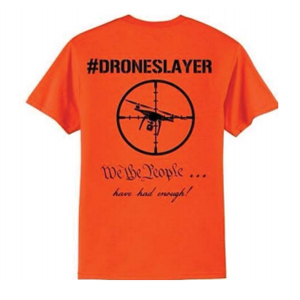 T-shirts sold by defendant William Merideth, who shot down a drone hovering above his backyard.

A hobbyist whose drone was shot down by a Kentucky property owner is asking a court for $1,500 in damages and a decision on who had rights to the airspace.

The issue is whether John Boggs’ drone was trespassing or if it was flying in airspace within the jurisdiction of the federal government, the Washington Post reports. The suit (PDF), filed Jan. 4 in federal court in Louisville, says Boggs’ drone was recording video of the horizon, woods and rooftops, and it was not recording images of the property owner or anyone else on his property.

The self-described “drone slayer” and defendant is William Merideth. “In my mind, it wouldn’t have been any different had he been standing in my backyard with a video camera,” Merideth told the Post.

The Federal Aviation Administration has developed proposed drone rules, but they have little to say about property rights, the article says. The proposals say commercial drones can’t be operated over a person not involved in the operation. Thirty-two states have adopted their own laws or resolutions regarding drones.

Under common law, landowners’ rights went “all the way to heaven,” according to the article. The U.S. Supreme Court considered the issue in 1946 in United States v. Causby, holding that a chicken farmer could be compensated for the loss to his business caused by military planes that barely missed the tops of trees on his property.

The Supreme Court didn’t say how far the farmer’s property rights extended into the sky, but it found he owns “at least as much of the space above the ground as he can occupy or use in connection with the land.”

The height of Boggs’ drone is one issue in the case. Witnesses said the drone was flying below the trees, leading a judge to dismiss criminal charges against Merideth in October. Boggs says images captured from his drone show it was flying about 200 feet above the ground.

Boggs is represented by Frost Brown Todd lawyer James Mackler. The drone industry “is growing quickly—and it’s to some extent being stifled by the legal uncertainty surrounding these issues,” he said.