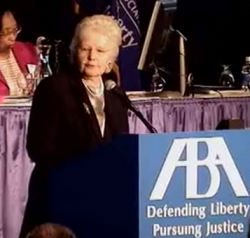 Massive state budget shortfalls threaten the ability of courts to continue to operate, Massachusetts Chief Justice Margaret H. Marshall, who is president of the Conference of Chief Justices, told the ABA House of Delegates today.

At least 46 states face revenue shortfalls totaling $350 billion from this year through 2001, she said. “Our budgets are being decimated, even as we know that in times of economic stress, people turn in even greater numbers to their state courts for relief,” she said.

Among the cutbacks in state courts are:

• New Hampshire is halting all civil and criminal jury trials for a month. Seven of the state’s 59 judgeships will remain vacant through the end of the fiscal year.

• Two rounds of budget cuts in Florida resulted in the layoffs of 280 court employees.

• Maine is no longer staffing magnetometers in courthouses.

“There is a funding level below which state courts will be unable to function at even minimally adequate levels. Are we approaching that precipice?” she asked. [The ABA Journal covered cutbacks in state justice systems in its January special recession issue.]

When it comes to the election of judges, “unprecedented amounts of special interest money now line judicial campaign coffers,” she said. Since the U.S. Supreme Court’s 2002 decision in Republican Party of Minnesota v. White, money in judicial races has “opened a Pandora’s box of difficult issues.”

As did the ABA, the Conference of Chief Justices filed an amicus brief in the U.S. Supreme Court case of Capterton v. Massey. It provides another opportunity for the court to limit the corrosive effect of money in judicial races, Justice Marshall said.

ABA Journal: “Caperton’s Coal: The battle over an Appalachian mine exposes a nasty vein in bench politics”